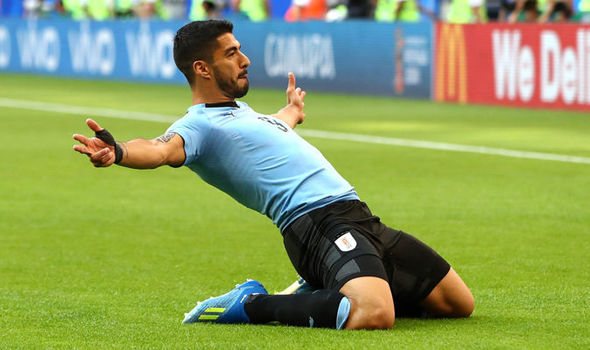 Russia gets trampled over by Uruguay as the latter becomes the first team to win all three of their World Cup group games without conceding a single goal since Argentina in 1998.

Luis Suarez opened the scoring for Uruguay in the 10th minute when he sent a fantastic free-kick from inches outside the box perfectly into the corner of the net, beyond the reach of Russian goalie Igor Akinfeev. In the 23rd minute of the game, Diego Laxalt tried a long-range shot. It deflected off Denis Cheryshev of Russia, changed directions sharply and hit the net. It was ruled an own goal and left Akinfeev with no chance.

The match bore witness to plenty of rough tackles between both the teams. The match got worse for Russia when their defender, Igor Smolnikov earned two yellow cards in the match which resulted in his exit from the match and reduced the Russian squad to 10 men.

In the 90th minute with the match already in Uruguay’s pocket, Diego Godin leapt high to head a corner shot which was saved by Akinfeev. Edinson Cavani was however just at the right position to poach in the rebound into the net thereby becoming the second player to score a goal in three separate World Cup tournaments for Uruguay (2010, 2014 and 2018) after his fellow teammate Luis Suarez.

Thus Group A sees Uruguay top the charts and Russia finish 2nd. In the other match of Group A, Saudi Arabia gets a consolation win and finishes 3rd in the group. Egypt couldn’t open their account this World Cup and will return home having had a disappointing tournament.