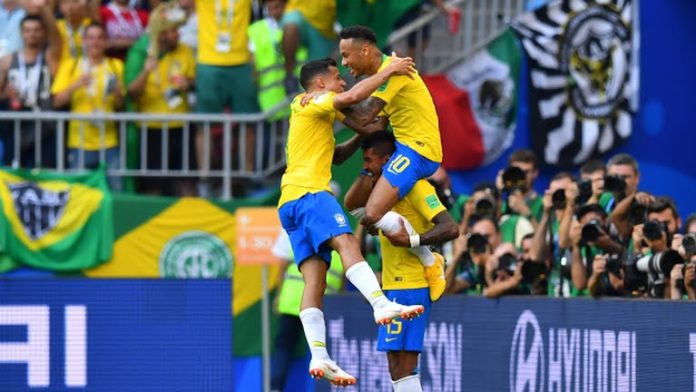 Brazil beat Mexico 2-0 to enter the quarter-finals in a match which saw one assist and one goal from Neymar.

In a match which saw Neymar rise up to the occasion, it was not without controversies. Neymar gave Brazil a 1-0 lead in the 51st minute following a great run and cross from Willian but later polarized fans on Twitter over a controversial tackle by Mexico’s Miguel Layun.

Replays showed that Layun did, in fact, step on Neymar’s leg, but his exaggerated reaction after the foul was something to behold.

In the 88th minute, Neymar tried to score a brace when he fired in a low shot which was partially saved by Ochoa. However, Roberto Firmino was not far behind and he tapped the rebound into the net to give Brazil a lead of 2-0.

The defeat and the stage for it will be sadly familiar for Mexico. They depart the tournament in their first knockout-round game for the seventh straight World Cup — a stunning run of bad losses, bad matchups and just plain bad luck. However, their goalkeeper Guillermo Ochoa was their star performer as he made eight saves today. If it were not for him, the Mexicans could’ve conceded more goals.

“I’d like to say once again that being able to play at such a level against Brazil showed that Mexico is a good team,” Mexican coach Juan Carlos Osorio said after the match. “We were just lacking a little efficiency, a little quality.”

However, he did have one complaint with the Italian referee, Gianluca Rocchi. Osorio suggested that Rocchi had given too much obeisance to Neymar, who fell theatrically several times during the game.

“There was very little contact,” he said, generalizing about many of the fouls against Neymar, “and every single time the referee stops the game.”

Watch the highlights of the match below:

FIFA World Cup 2018: Can the Blue Samurais cause an upset against the Belgian Red Devils?

Cricket: Virat Kohli accepts the Kit Up Challenge from the Little Master