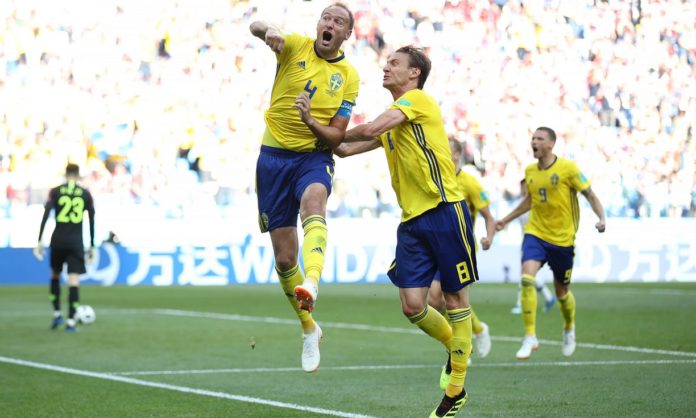 The second Group F match saw European underdogs, Sweden take on Asian giants, South Korea in Nizhny Novgorod. It was an important match for both teams as each wanted to secure 3 points early on in the group stage. However, in what seemed to be an evenly balanced match between these two in the turf, it was Sweden who got the last laugh thanks to a VAR penalty which Swedish defender, Andreas Granqvist made full use of.

#SWEKOR | That was the first #WorldCup goal for #SWE since Henrik Larsson scored against #ENG in 2006… pic.twitter.com/IX05YL4vbw

The first half of the match was not at all tense or action-packed but was rather forgettable which saw players of both the team missing a lot of sure-shot opportunities. Also, this Sweden side was obviously lacking in speed as is evident with Zlatan Ibrahimovic’s absence in this World Cup. But they came back in the second half and made most of their opportunities and grabbed the goal to win the game.

Sweden now joins Mexico at the top of the table while Korea joins Germany at the bottom. Sweden will face group favourites Germany next Saturday while South Korea will face Mexico on the same day. With this World Cup already looking to be an uncertain one, it remains to be seen which two teams will qualify from this Group for the Round of 16.