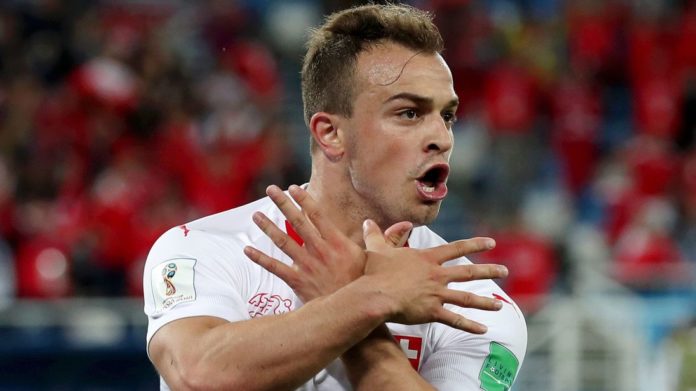 Xherdan Shaqiri’s Switzerland might have failed to qualify for the quarter-finals after losing to Sweden in yesterday’s match but that didn’t stop Shaqiri from thanking his supporters.

Earlier today, “the magic dwarf” posted a message on his Twitter account thanking fans from all over the world. He wrote:

“Big Thanks to all Fans from all over the World for the amazing support during the WorldCup!”

Big Thanks to all Fans from all over the World for the amazing support during the WorldCup!🌎❤️ 🤲🏽🙏🏼🇨🇭#hoppschwiiz#allezlasuisse#forzasvizzera #XS23#proud⚽️❤️ pic.twitter.com/qrsiDqtNAi

Both Xherdan Shaqiri and his teammate, Granit Xhaka along with their captain, Stephan Lichsteiner were on the verge of getting banned due to their controversial celebrations after winning against Serbia in the group stages. However, they escaped the bans and Xhaka and Shaqiri were fined 10,000 Swiss francs while Lichsteiner was fined 5,000 Swiss francs with all three given warnings.

After the news broke out that they’ve escaped the bans, Kosovan and Albanian citizens got together to collect money to pay their fines.

Football : James Rodriguez tweets out heartbreaking picture after Colombia’s elimination from the WC.