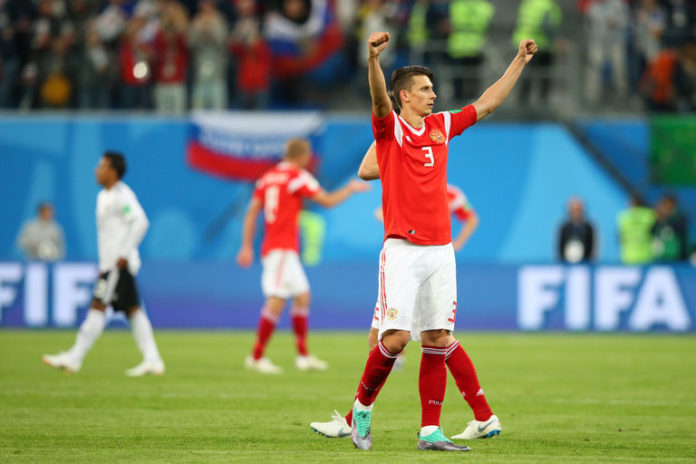 Host nation Russia have booked their place in the knockout stages with an emphatic win over Egypt. Goals from Denis Cheryshev, Artem Dzyuba and an own goal from Ahmed Fathi ensured that Russians made it past the Pharaohs. Poised at 0-0 at the end of the first half, the Russians were 3-0 up by the 62nd minute. A customary Mo Salah goal in the 72nd minute gave the Egyptians some sort of hope but it was a mountain too big to climb. The Russian Juggernaut continues as they have already scored 8 goals in two matches conceding just one. 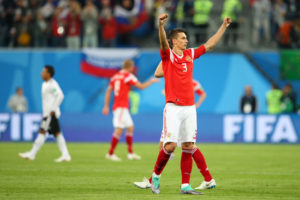 Salah scored Egypt’s first goal in the world cup since 1990. With dreams of what could have been, Egypt are invariably out of contention for qualifying for the knockout stages of the competition. However, they will look to bow out on a high note when they face Saudi Arabia for their last match of the group stages. A resilient Egypt Defense saw them nullify Russia’s attack as both seemed equally matched in the first 45 minutes. But the second half was a completely different story. It all started when Egypt captain tried to intercept a miscued shot only to end up in the back of his own net. 10 minutes later Russia scored again, this time through Denis Cheryshev – The man who scored two goals against a hapless Saudi Arabia team. Just when we thought Russia would slow the game down, they scored another goal through Artem Dzyuba who recieved a 40-yard pass inside the box to smash home Russia’s 3rd goal of the match and eventually put the game beyond Egypt. It was heartbreak for Salah who could not taste success with Liverpool and Egypt having carried these two teams through the entirety of last season and the World cup qualifiers respectively.

Watch the highlights of Russia vs Egypt here :