When we think of the France National Football Team some of the legends like Zinedine Zidane, Thierry Henry and Michel Platini come to our mind. Looking to follow their footsteps will be the current French striker Antoine Griezmann hoping to lead France to their 2nd World Cup title. 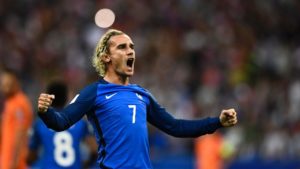 Aged 27 years, Griezmann has played a total of 54 matches for Les Bleus (The Blues) scoring 20 goals for them. Out of the 20 he’s scored 6 of them came in the UEFA Euro 2016 where he won the Golden Boot scoring 3 more than the next closest competitor.

Playing for Atletico Madrid at the club level, Griezmann has been an instrumental figure in leading them to a UEFA Europa League triumph and 2 UEFA Champions League finals. He has been their leading goalscorer each season netting 112 goals overall.

After making his national team debut in 2014 Griezmann has never looked back. Along with some promising youngsters like Kylian Mbappé and Thomas Lemar in the squad to assist him he will look to bring the world cup back home.

Here is the video of all the goals Griezmann has scored for France.