Iceland gets blown away by Musa as Nigeria beat Iceland 2-0 in the 2nd fixture of Group D.
Iceland came from a hard-earned 1-1 draw against Argentina which saw Lionel Messi miss a penalty whereas Nigeria came from a loss against Croatia. 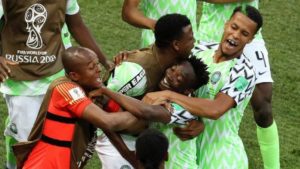 The Super Eagles started the match at a slow pace and The Vikings had the better of them in the first half where they fired 6 shots to the former’s zero. Then came the second half and the storyline started changing. Victor Moses took a run down the right flank and put in a cross which Musa smashed home. Musa got his 2nd of the night at the 75th minute when he beat the keeper and scored in an unguarded net.

Iceland missed a late penalty awarded after a VAR review, which Gylfi Sigurdsson firing over. He targetted the top corner but the shot sailed over the bar.

This gives Argentina a chance to qualify for the Round of 16 if they can beat Nigeria in the 3rd fixture given that Iceland loses to Croatia. Anything other than this would see the previous World Cup Runners-Up get eliminated in the group stage

Few memorable moments from the game:-

Gylfi Sigurðsson blasts his penalty into the stands! It's just not #Iceland's day at all today, and #Nigeria still lead 2-0. #NGAISL #NGA #ISL pic.twitter.com/pDbFyaASIx