Iago Aspas scored an equalizer in stoppage time with VAR’s help as Spain manage an unconvincing draw against Morocco to top Group B at Kaliningrad.
In Round of 16, Spain will face hosts Russia for a place in the Quarterfinals.

A dreadful mix-up in the Spanish defence led to the first goal by Khalid Boutaib, Isco amending it 5 mins later from a pass by Andres Iniesta. But Spain looked wobbly in defence when pressed by a committed, aggressive Morocco side. Then, Youssef En-Nesyri looked to have won it for Herve Renard’s side when he powered in a clinical header in the 81st minute. But Aspas flicked in Dani Carvajal’s low cross to make it 2-2, with referee Ravshan Irmatov initially disallowing the goal calling it an offside before changing the decision courtesy to VAR. Nordin Amrabat was unlucky not to score in the 2nd half when his outside foot shot hit the bar and came back. 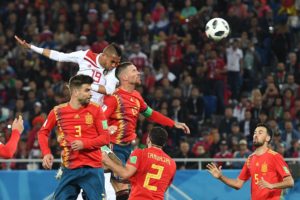 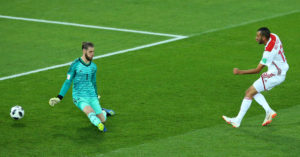 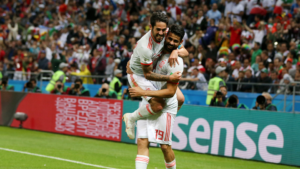 FIFA World Cup 2018 : Portugal fend off Iran to book their place in the Round of 16