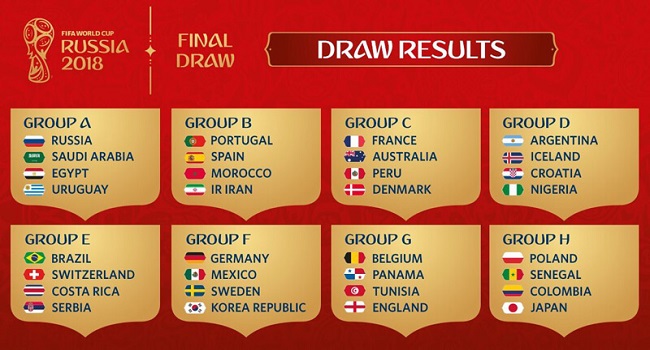 What are the odds of your team winning the World Cup?

The 2018 FIFA World cup gets underway on June 14th, as top nations from around the world will compete against each other to lift the coveted trophy. Footballing powerhouses such as Brazil, France, Spain, Germany, Argentina are set to start the tournament as favorites. However, nothing goes as predicted in this ball game. The mightiest of teams may lose to the smallest nations of the world cup. One can ask the England national football team in order to confirm this statement. While some teams may have a dream run in this tournament, some may face utter disappointment. Heart breaks, surprise and unpredictable results have made the world cup the biggest quadrennial international football tournament. This is our predictions for the world cup by looking at the draw.

Group A
Winner : Uruguay
Runner Up : Russia
Arguably the strongest team in this group, Uruguay are tipped to finish on top of group A ahead of Egypt, Host nation Russia and Saudi arabia. However, the runner up position can spark some intense contest as both russia and egypt will look to seal that position. Although, we predict that Russia have the upper hand in this race, we look forward to having an exciting match up between these two teams.

Group B
Winner : Spain
Runner Up : Portugal
These two European giants are favorites to qualify for the knockout round from this group. The match between Spain and Portugal is one to look forward for, as this could decide the fate of the group. Spain, who will be looking forward to erase their memories of 2014 WC, where they were knocked out of the group stage, are favorites to top the group while Euro 2016 winners Portugal are predicted to qualify as runners up of this group.

Group C
Winners : France
Runner Up : Peru
France, hands down, have the best young squad in this world cup. Any result less than the semi finals will be an underachievement for this team. However, the runner up spot is up for grabs, as two equally matched teams – Eriksen’s Denmark and South american Peru have equal chances of qualifying. Although, we favour Peru to go through, one cannot predict the result of this fixture.

Group D
Winners : Argentina
Runner up : Croatia
Led by the magical Lionel Messi 2014 World Cup runners up Argentina are most likely to top the group ahead of Croatia, Nigeria and Iceland. One might say that this group may be the toughest group as all the four teams have a chance for qualifying to the knockout stage. While Croatia and Nigeria look to seal the runner up spot, Iceland are a force not to be underestimated. Taking inspirations from their iconic 2-1 victory over England in the Euro 2016, Iceland will look forward to pull off a blinder by qualifying from this group.

Group E
Winner : Brazil
Runner up : Serbia
Having won the world cup 5 times already, Brazil are favorites to win this world cup. Qualifying for the knockout stages wouldn’t be a problem for the selecao, as they will rely on the trio of Neymar, Coutinho and Gabriel Jesus to lead their team to victory. Although Switzerland are a decent team, we tip Serbia to qualify ahead of them.

Group F
Winner : Germany
Runner Up : Mexico
Defending champions and 4-time winners Germany will be looking forward to have a good outing at this this year’s world cup. Driven by extraordinary squad depth and technically gifted players, Germany are title contenders as always. Mexico are predicted to be the other team to qualify from this group.

Group G
Winner : Belgium
Runner Up : England
Belgium who have genuine world beaters such as Eden Hazard, Kevin De bruyne, Romelu Lukaku, in from Dries Mertens are the dark horses of this years tournament. England, on the other hand will be hoping to put their 2014 WC memories behind having been knocked out in the group stages and display a better performance than last time.

Group H
Winner : Colombia
Runner up : Poland
Having had a memorable world cup last time, Colombia will depend on their star playmaker James Rodriguez to come good this time also and etch his name into world cup folklore. Lewandowski driven Poland are favoured to finish as runners up ahead of Mane’s Senegal. Japan may cause an upset or two by beating any of the three teams. This group maybe called as the group of death as the standard of competitiveness will be relatively high due to equality in the strength of teams.

Knockout stages :
The top two teams from each group will qualify for the knockout stages of the competition.
In the round of 16 stage, 8 matches will be played where the winner progresses to the quarter finals. Hoping that our predictions come right, this will be the matches for the last 16.

R16 Match 1: 30th June
Fixture : Winner of A vs Runner up of B
Predicted team : Uruguay vs Portugal
This could possibly be the most exciting match in the round of 16 as the winner is just as unpredictable as it could get. Albeit, we tip Uruguay to get the better of this fixture and advance to the semi finals.
R16 Match 2: 30th June
Fixture : Winner of C vs Runner up of D
Predicted team : France vs Croatia
This could be a highly competitive match as two exciting teams go head to head for a place in the quarterfinals. France, as predicted earlier, are favored to be the winner of this match as they will rely on their world class attack to break through the Croatian defense with ease.

R16 Match 3 : 2nd July
Fixture : Winner of E vs Runner up of F
Predicted team : Brazil vs Mexico
We predict Brazil to advance to the next stage as mexico would not be much of a challenge for Brazil’s attacking prowess.
R16 Match 4 : 2nd July
Fixture : Winner of G vs Runner up of H
Predicted team : Belgium vs Poland
We place our money on Belgium to go through in this fixture as the Belgian attacking trio of Hazard, Lukaku and Mertens will look to put Poland to bed.

R16 Match 5 :  1st July
Fixture : Winner of B vs Runner up of A
Predicted team : Spain vs Russia
We are looking forward to seeing a spirited fight by the host country against a superior Spanish side. However, we foresee that Spain will go through eventually.
R16 Match 6 : 1st July
Fixture : Winner of D vs Runner up of C
Predicted team : Argentina vs Peru
We are hoping that this all south american fixture wouldn’t be much of a hassle for Argentina despite the fact that Peru had risen incredibly in the fifa world rankings in the last 3 years.

R16 Match 7 : 3rd July
Fixture : Winner of F vs Runner up of E
Predicted team : Germany vs Serbia
Defending Champions Germany will be looking to easily make it past the round of 16 against the Serbians.
R16 Match 8 : 3rd July
Fixture : Winner of H vs Runner up of G
Predicted team : Colombia vs England
Close game. We pick Colombia to get the better of England.

Quarterfinals :
Winners of the round of 16 match will advance to the Quarter final stage of the tournament. 8 teams qualify for the QF stage.The QF stage has 4 matches and the winner of each match will advance to the semi final.
QF-1 : 6th July
Fixture : Winner of R16 Match 1 vs Winner of R16 Match 2
Predicted team : Uruguay vs France
Having topped their group and beaten euro 2016 winners portugal, we believe the south american side Uruguay will lose to France in this stage.

QF-2 : 6th July
Fixture : Winner of R16 Match 3 vs Winner of R16 Match 4
Predicted team : Brazil vs Belgium
Selecao, with the attcking trio of Neymar, Coutinho and Gabriel Jesus and a midfield that has Real’s Casemiro, fernandinho and Barca’s paulinho are easily the better team on paper in this fixture. We believe that Brazil will go past Belgium.

QF-3 : 7th July
Fixture : Winner of R16 Match 5 vs Winner of R16 Match 6
Predicted team : Spain vs Argentina
This match could quite possibly go down as the match of the tournament. High profile clashes often lead to memorable matches. The amount of individual stars that spain and Argentina have are second to none. With an attack that comprises of Dybala, Higuain, Sergio Aguero and the great Lionel Messi, Argentina are capable of decimating the strongest of defenses. We give Argentina the edge over spain in this fixture.

Semifinals :
By this time, only 4 teams remain in the competition. The semi finals of the world cup has given us some memorable matches and not-so-memorable matches for a few(Maybe ask any brazilian about 2014 world cup semifinals). As always, the winner will advance to play the Finals and the loser will play for the third place in the playoff match.

SF-1 : 10th July
Fixture : Winner of QF-1 vs Winner of QF-2
Predicted team : France vs Brazil
Could there be any words to describe this match? We’re afraid not. Two of the greatest teams that have the most star studded squads will be pitted against each to play for a place in the world cup final. The stakes will be high and match will be intense. It is match where the attacking prowess could decide the outcome of the match. Hardest choice we’ve ever chosen but we give Brazil the edge over France in this fiery fixture.

Fast forward to a month from now, we will have our final two teams that are going to play for the biggest prize in international football. By this time, we would have seen upsets, shockers and much more. As predicted Brazil and Germany would play the finals of the World Cup finals. It would be a repeat of the 2002 World cup finals. If it happens Brazil will look to avenge their 7-1 loss to Germany in the 2014 semifinals while Germany will look to seek revenge for their 2-1 loss to Brazil in the 2002 world cup finals.

One thing is for sure, if all our predictions turn out to be successful, Russia 2018 will surely be a memorable one for the footballing fraternity.