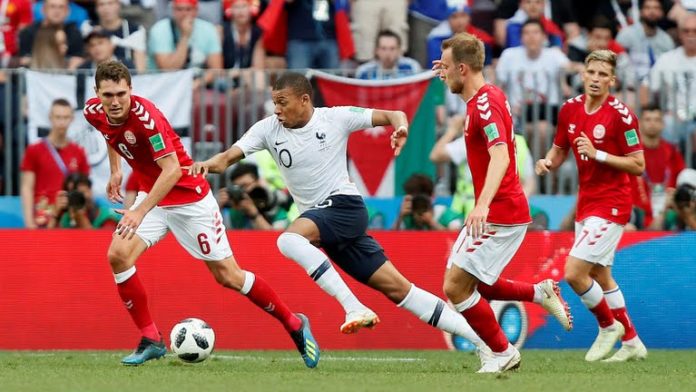 France and Denmark advance to the knockout stages after the first goalless draw of World Cup 2018.

Les Bleus finished top of the group despite another run-of-the-mill performance, while Peru’s win over Australia confirmed Denmark’s place in the knockout stages.

France, already qualified, used the match as an opportunity to give several squad players some game time, which resulted in an incoherent performance.

Denmark still had work to do to ensure qualification for the last 16, but Peru’s early goal in the other Group C match meant Australia’s chances of progressing ahead of the Danes looked slim. A second Peru goal after half-time made qualification all but certain.

Deschamps brought on Kylian Mbappe in the final 10 minutes in an attempt to find a goal but not even the Paris Saint-Germain forward could find a goal in this dreadful affair, ending this World Cup’s 36-game run of goals.

Group winners France will play the runner-up of Group D (either Iceland, Nigeria or Argentina) on Saturday, while Denmark will face Croatia on Sunday for a place in the quarter-finals.

The video highlights of the match:

FIFA World Cup 2018: Iceland will have to rely on luck and determination if they want to advance to the knockout stage