2010 champions Spain will look to end the host’s brilliant run in the competition as they look to book a place in the quarterfinals. Spain topped group B while Russia finished second behind Uruguay in the group A. Russia entered the competition as the lowest ranked nation at rank no. 70. Spain, on the other hand are ranked 10 in the world ranking list.

The roads to this stage have been quite strikingly different. Spain have had a roller coaster of a campaign drawing Portugal and Morocco and beating Iran enroute to their knockout phases. Spain clinched top spot in their group on the last day of the group B fixtures. The hosts were off to the best possible start beating a hapless Saudi Arabian side 5-0 in their opening match and beating Salah’s Egypt 3-1. But a disappointing 3-0 loss to Uruguay in their final group stage match. If Spain are to win this contest, they must keep in mind that they will be playing against an exciting Russian side that cannot be underestimated. La Roja’s Diego Costa and Russia’s Denis Cheryshev both have scored 3 goals each and both of them are their team’s highest goalscorers respectively. 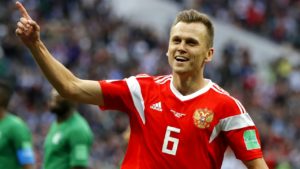 With the availability of full squad for Spain, Spain coach Fernando Hierro, who was appointed just days before the start of the world cup, can make all the changes that are required to solidify and correct their defensive problems.

Here's how #ESP and #RUS will begin in Moscow 👇#ESPRUS pic.twitter.com/FtetYgKCtG