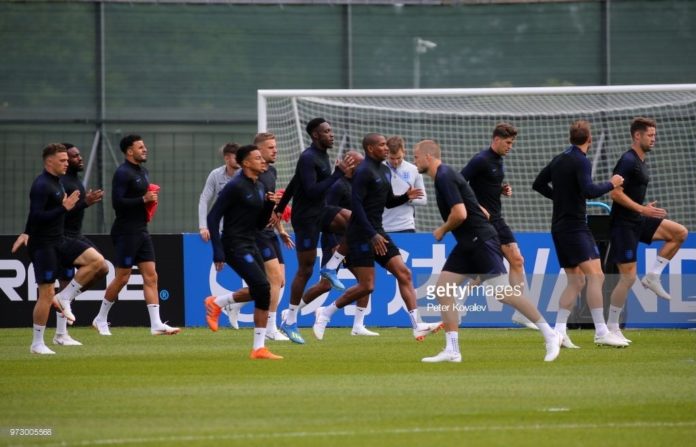 The Three Lions look relaxed in their first training session as they were the recipients of a traditional Russian welcome by the hosts of the 2018 FIFA World Cup. Before their first game against Tunisia at the World Cup, the England squad trained in front of around 400 people in Zelenogorsk, outside St. Petersburg.

Differing from the tactics of his predecessors, the England coach Gareth Southgate allowed the squad to come out to English rock band Stone Roses’s music. At the end of the session, the squad happily posed for photographs with the locals and signed autographs. However, Marcus Rashford was nowhere to be seen. The 20 year old, Manchester United forward was allowed to rest as a precautionary measure because of a knee-injury issue.

Nice welcome this morning from the locals and fans 🙌🇷🇺⚽️ @England pic.twitter.com/hQvj7DtiRy

We've had a warm welcome in Russia and great to get a first training session under our belts. 🦁🦁🦁 #ThreeLions #Eng #WorldCup pic.twitter.com/ArjNkRIWaQ

Watch the video of their training session below:

FIFA World Cup 2018: 10 Underrated Players To Watch Out For