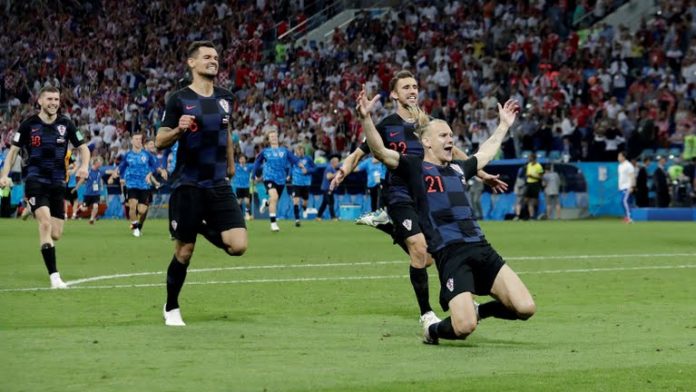 Tonight’s match in Fisht Stadium, Sochi saw hosts Russia take on Croatia in what turned out to be one of the most gruelling and heart-wrenching matches we’ve seen in this tournament.

A wild 1-1 match after 90 minutes saw each team score again in extra time, with penalty kicks deciding consecutive matches for both teams.

But it was Croatia who sealed a ticket for themselves in the semi-finals after France, Belgium and England when they beat Russia 4-3 in penalty shootouts.

The match seemed to be pretty boring in the first few minutes of the first half but soon changed its complexion when Denis Cheryshev fired a 25-yard shot in the top-left corner of the Croatian net which shocked Danijel Subasic.

However, their lead was shortlived as shortly afterwards in the 39th minute Andrej Kramaric equalised for Croatia.

The teams then went back and forth in regulation, and neither could find the winner, sending the game into extra time. Both teams went 30 extra minutes in their round of 16 clash, with Russia beating Spain and Croatia beating Denmark.

And in the extra-time, it looked like Croatia was well on their way to the victory and could avoid the penalty shootouts as Domagoj Vida headed home from a corner kick in the 101st minute for the 2-1 lead.

With just five minutes to go when Croatia thought they had the match in their pockets, Mario Fernandez equalized for Russia with a glancing header to make it 2-2.

And in the penalty kicks, the Russians lost their poise. Fyodor Smolov tried a cheeky lofted shot to open it, and Subasic read it well to save it. Fernandez went from hero to villain, missing the goal completely on his opportunity, as Rakitic sent his team into the next round.

One can’t help but feel sorry for Russia. They were the lowest ranked team in the World Cup and were mostly written off by football pundits and their fans alike before the World Cup began. But the way they fought their way through the group stages and reached the quarter-finals has won hearts and is worthy of praise.

The semi-finals are now set as it’s Belgium vs. France on Tuesday, and England vs. Croatia on Wednesday.

Highlights of the match:

FIFA World Cup 2018: The English take another step forward in ‘bringing it home’