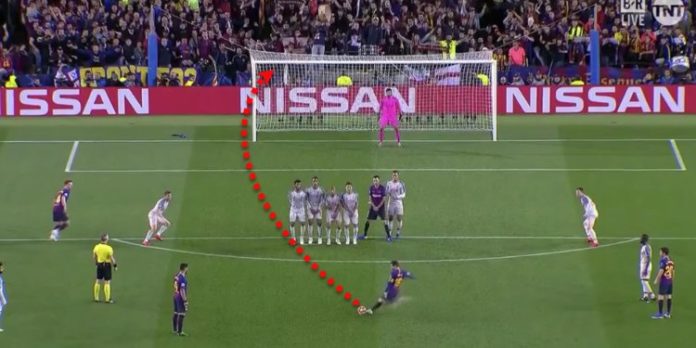 The official Twitter handle of UEFA Champions League conducted a poll on their microblogging site wherein they asked the fans to vote for the goal of the tournament. The fans gave their verdict, choosing Lionel Messi’s spectacular free-kick against Liverpool in the first leg of the semi-final.

⚽️🏆 Goal of the Tournament 🏆⚽️

The four nominees were Lionel Messi’s curling free-kick against Liverpool, Christiano Ronaldo’s one-touch flick against Manchester United, Arjen Robben’s mesmerizing zigzag goal against Benfica, and Ivan Rakitic’s piledriver against Tottenham Hotspur. When the results came, it looked as if fans didn’t have a tough time choosing the winner as Messi won by an overwhelming margin.

✨ You voted Lionel Messi's stunning free-kick against Liverpool the #UCL Goal Of The Tournament!

This development comes a day after UEFA awarded Ronaldo’s goal against Manchester United as the best goal of the season. The fans seem to disagree with the parent body’s decision, intensifying the debate on the greatest footballer on the planet.

As the season has concluded, both Messi and Ronaldo are with their respective nations gearing for their international matches. Argentina will face Nicaragua on Saturday whereas Portugal will take on Switzerland on Tuesday.