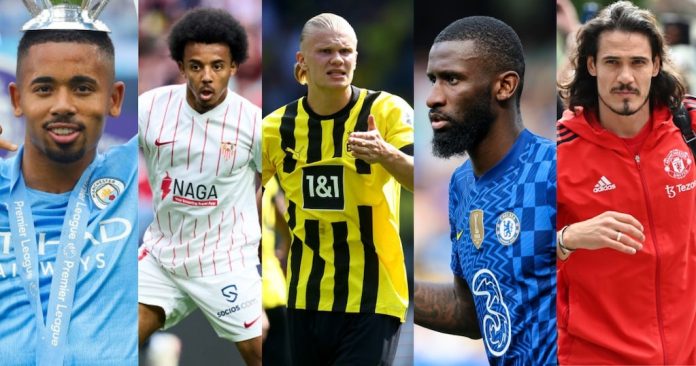 With the New Year upon us, the English Premier League teams are preparing to go into the January transfer market with several welcoming new faces. However, the January transfer market is relatively easy for EPL clubs, and lots of work must be done. Nonetheless, that doesn’t deter clubs from making big deals, and sports punters can redeem the 22bet bonus codes to have fun wagering.

Jurgen Klopp and his team have been working hard to sign the sensational Cody Gakpo from PSV Eindhoven as Liverpool attempts to recover from their poor season start. Elsewhere, table leaders Arsenal are still linked to signing multiple players in a bid to try and continue challenging for the EPL crown.

Slightly down the EPL table, several relegation candidates will be attempting to make their squads stronger in an effort to avoid booking a spot in the championship next season. That said, here are some problem positions for EPL teams and the perfect solutions for these conundrums.

Following Gabriel Jesus’s injury, Arsenal really needs an out-and-out striker that can spearhead their attack. While Eddie Nketiah is well suited for the role, the gunners need another striker of the same caliber if they’re to continue their quest for the title.

Atletico Madrid forward Alvaro Morata seems like the perfect solution for the gunners. Despite only scoring six goals this season, Morata found great form during the Qatar World Cup and might fancy another run at the EPL despite facing difficulties with Chelsea.

After signing David Datro Fofana and Christopher Nkunku, soon expected to follow, the Blues have rectified the need for a striker. Getting another forward-thinking right-back may be a good idea with Reece James out with injury issues.

The ideal candidate for this position might be the Dutch international Rick Karsdorp. The Roma forward recorded seven assists for his side last season, but Jose Mourinho has constantly told him he doesn’t have a future at Stadio Olimpico.

Having signed Gakpo into their squad, another World Cup sensation might follow the Dutch star to Anfield. Sofyan Amrabat stole the show playing for Morocco in Qatar and helped his side reach the semi-finals. Amrabat has been linked to moving to Merseyside and could be a cheaper signing during the January transfer window before they make a move for Jude Bellingham from Borussia Dortmund in the summer.

What can you add to what’s arguably the best EPL team at the moment. Of course, a talented Portuguese attacker will be a worthy addition. Rafael Leao garnered plenty of attention during his performance in the Serie A for the last few seasons, and experts suggest that Manchester City can offer him a huge deal. Rafael would immediately challenge Phil Foden and Jack Grealish for a starting position at Etihad.

While hunting for the most affordable forward after Christiano Ronaldo’s departure, the Iranian frontman Mehdi Taremi may be the perfect person. The 30-year-old has a solid reputation as one of Europe’s most lethal forwards, having recorded 67 goals for Porto in the last two and a half seasons.

While Taremi’s age may count against him, it might help the Red Devils secure his services at a lower price. He might also have one and a half years left in his contract at Porto, and a deal for Mehdi Taremi makes a lot of sense this January for Manchester United.