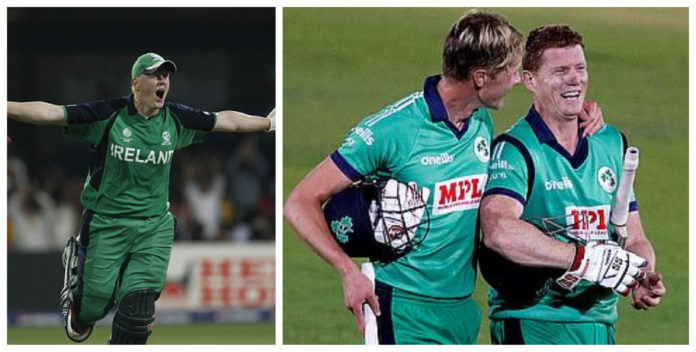 While Ireland’s emphatic chase against England in the 2011 World Cup was deemed “Once In A Lifetime”, the Irish repeated their efforts from Bangalore to register a historic win against England. Twin centuries from Paul Stirling and Andy Balbirnie blew England away from a prospective chance of registering a whitewash.

Ireland opted to bowl after winning the toss while naming a single change. Meanwhile, England had to make a forced change due to an injury to Reece Topley. Tom Curran was slotted into the eleven in place of the left-arm pacer.

The hosts’ woes at the top continued as Jason Roy was dismissed in the very first over itself. The Irish bowling attack had an eventful powerplay by wiping out the top-order in the first nine overs itself. Reeling at 44-3, Eoin Morgan was joined by Tom Banton in the middle.

The skipper shared an emphatic 146-run stand with Banton to loosen Ireland’s grip on the game. Morgan brought up his 14th ODI hundred as the pair kept punishing the bowlers with boundaries. Ireland did manage to claw their way back into the contest with a succession of wickets, but their work was undone by a 73-run partnership for the eight-wicket.

After narrowly missing out on a fifty in the previous match, David Willey made amends to reach the landmark to steer England well ahead of the 300-run mark. The hosts eventually set a target of 329 for Ireland to chase.

Ireland’s stellar chase was led by Stirling and Balbirnie

Batting under the lights, the side had a breezy start dominated by Stirling. Gareth Delaney’s resistance wore out right after the fifty-run mark.

England were without their captain Eoin Morgan on the field after the centurion suffered a groin injury while batting. Moeen Ali, leading the side in Morgan’s absence struggled to find the next breakthrough.

Stirling and skipper Balbirnie shared a mammoth 214-run stand which gave Ireland a realistic chance of avoiding a potential whitewash. Paul Stirling played an explosive knock of 142 before being run-out in the 42nd over.

Some diligent death bowling by the England bowling attack drove Ireland into pressure leading to the dismissal of Balbirnie right after he reached the three-figure mark.

Fate delivered another chance to Kevin O’Brien to finish the chase this time around after he failed to do so 9-years before despite a record-breaking hundred. The veteran’s experience blended well with young Harry Trector’s rush of blood to finish the chase off with a ball to spare.