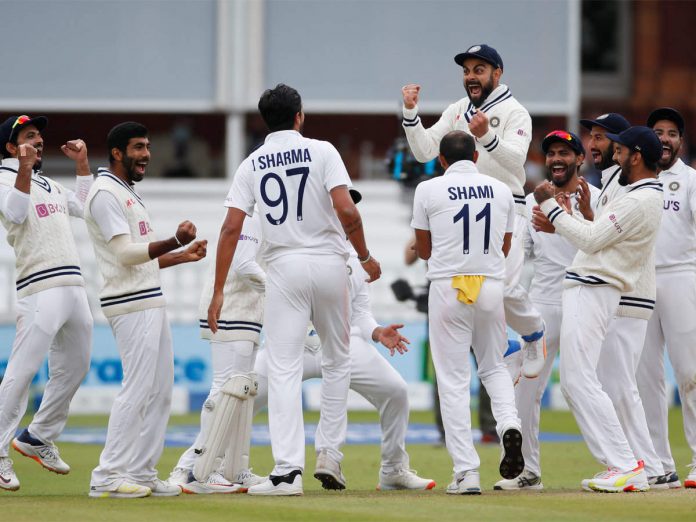 The final day of the second Test saw the advantage being shifted from one camp to the other. India claimed a win at the iconic Lord’s to go 1-0 up in the series in the final moments of the test.

Resuming from their overnight score of 181-6, all hopes rested on Rishabh Pant to bail India out of the predicament to a respectable target for England. While the swashbuckling wicket-keeper batsman got off on the right foot with promising and confident strokes, he got sent back into the pavilion by Ollie Robinson.

England looked to bundle out the frail India tail order and hope to chase a target below or around the 200-run figure. However, the pair of Jasprit Bumrah and Mohammad Shami had other plans. They put on a historic 88-run partnership and registered their highest score in international cricket on the bank of some sledging by the England bowlers. The stand ensured that India ruled out a loss from the contest and set the hosts a target of 272 to win the Test.

India began the fourth innings on a stellar note. Bumrah and Shami scalped the first two wickets as both the openers departed without scoring. This marked the first instance that England openers were dismissed for ducks at home. Rohit Sharma dropped Haseeb Hameed at second slip and the youngster and skipper Joe Root frustrated the Indian bowling unit for a while.

The introduction of Ishant Sharma into the attack turned things around. The veteran brought a delivery to move back into the batsmen and as a result, Hameed was trapped and was dismissed. Sharma was able to replicate the delivery in the final delivery of the session to send Jonny Bairstow back to the pavilion.

India began the final session of the Test on the brightest note possible. Jasprit Bumrah induced an edge off Joe Root and the catch was safely pouched by Virat Kohli at first slip.

Mohammad Siraj scalped the wickets of Moeen Ali and Sam Curran off successive deliveries to send England to 90-7. Sam Curran recorded a king pair after having been dismissed for a first-ball duck in the first innings as well.

India withstood another resistant stand from Jos Buttler and Ollie Robinson but in the end, Mohammad Siraj castled James Anderson to finish off the proceedings.