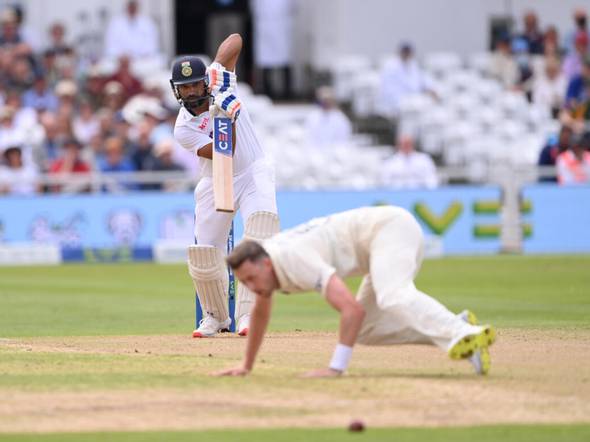 Day 2 only witnessed play over a session as rain interrupted the proceedings. India finished the day on 125-4, still trailing by 58 runs off England’s first innings total.

Team India started the day’s play at 21-0, and the opening pair continued their good work from yesterday’s final session. The duo stitched a historic run stand as England pacers were left frustrated. However, the hosts managed to sneak through to the session break with a wicket under their belt.

Rohit Sharma could not resist a pull shot towards the end of the session and found the fielder at deep square leg. The well-settled Hitman once again failed to convert his start and marked yet another dismissal in his thirties.

KL Rahul, who looked steady throughout, converted his start into a well-deserved half-century, but the team was losing the plot at the other end. Cheteshwar Pujara survived an early LBW call following a successful review. But the under-fire batsman did not hang around for long after James Anderson managed to get a nick through.

The veteran pacer drew first blood in the third establishment of his well-famed rivalry with Virat Kohli by removing him for a golden duck. Kohli sheepishly poked around the fourth stump and the edge was taken by Jos Buttler behind the wickets.

To make matters worse, Ajinkya Rahane departed following a suicidal run-out after having just escaped a close call a few deliveries earlier. A direct hit from point was more than enough to send back the deputy for just 5 runs.

The rain made its way with KL Rahul and Rishabh Pant at the crease, and while play was resumed twice after the brief interruptions, it made the final say, and the Day was forced to be called off in the end.