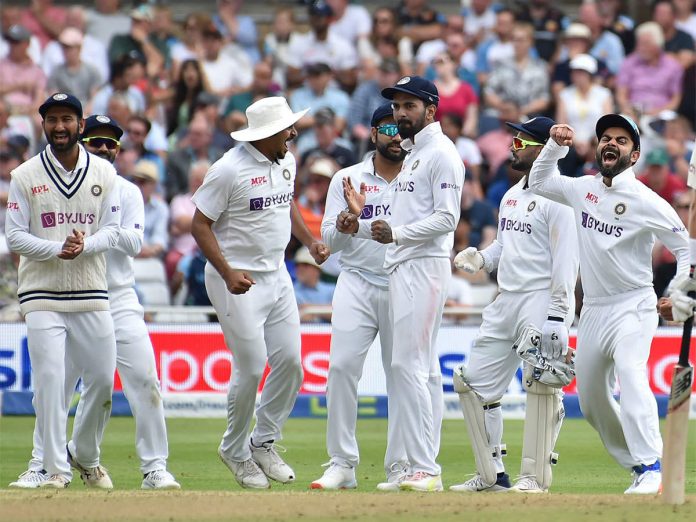 The highly anticipated second leg of the WTC Final flagged off with the series between India and England. The visitors capped a brilliant display courtesy of their bowlers to start the fixture on a good note.

Virat Kohli’s terrible run with the coin continued with Joe Root winning the toss. The England skipper elected to bat first on a surface with a thick layer of grass. England opted not to field a spinner while India decided only to play one. Ravindra Jadeja was the lone spinner as Shardul Thakur replaced Ravichandran Ashwin in the playing eleven. With Mayank Agarwal ruled out of the first test, KL Rahul was announced as the opening partner to Rohit Sharma.

India got off to a flying start as Jasprit Bumrah trapped Rory Burns right in front after a beautiful set-up in the very first over. The teams shared the session after India were able to claim another wicket while England resisted the early assault.

While Shami struck early in the second session, England took the command with a solid partnership for the fourth wicket between Joe Root and Jonny Bairstow. The hosts were well poised at 138-3 until Bairstow was trapped LBW by Shami to bring the curtains down in the second session.

It was Shami once again, who got the breakthrough once again for the team with another delivery sliding down the leg side. Dan Lawrence marked the third duck in the England batting unit and triggered a huge collapse.

Joe Root became England’s leading run-scorer in international cricket and marked the occasion with his 50th Test fifty as well. His sublime knock was ended by a gentle out-swinger by Shardul Thakur. The right-arm pacer struck once again in the over by removing Ollie Robinson with a tame dismissal.

Sam Curran brought India harrowing memories of 2018 with a few lusty blows towards the end. India struggled to claim the final wicket and it took a pinpoint yorker from Bumrah to end the frustrating 23-run stand and the proceedings as well at 183.

The opening pair of Rohit Sharma and KL Rahul handled England’s short late burst with ease and ended the first Day on 21-0.