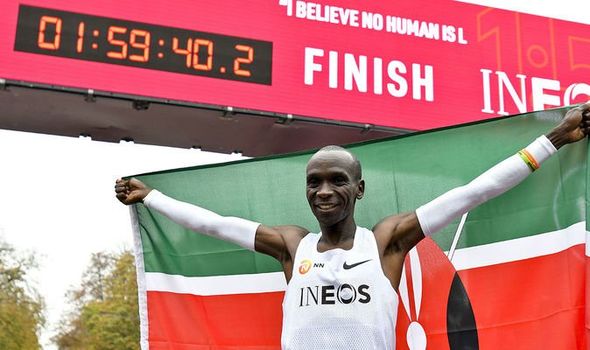 On Saturday, Kenya’s Eliud Kipchoge cemented is place in history when he became the first ever person to run a marathon in under two hours. The Olympic champion finished with an unofficial time of 1hr 59min 40.2sec, on a specially prepared course in Vienna. He had previously set the men’s world record for the distance (26 miles) with a time of 2hr 01min 39sec, in Berlin marathon last year. But this time he was accompanied by 41 pacemakers and a car in front of them which set the pace. And unsurprisingly, Kipchoge bested his own record.

“I am the first man – I want to inspire many people, that no human is limited,” said the legendary marathon runner.

“We can make this world a beautiful world and a peaceful world. My wife and three children, I am happy for them to come and witness history” he added.

The 34-year-old maintained his extraordinary pace at around 2:50 minutes per kilometre, as he passed the finish line with a smile on his face. He was even 11 seconds advance during mid-race as many fans waved the Kenyan flag, cheering him on.

🗣️ "It has taken 65 years for a human being to make history in sport after Roger Bannister." – @EliudKipchoge #INEOS159 #NoHumanIsLimited pic.twitter.com/JWxbVHglco

Earlier this week, Kipchoge told the reporters that his attempt in Vienna was about “making history in this world, like the first man to go to the moon”.

“I just have to make that click in people’s minds that no human is limited,” he stated.

But despite his world record, the International Association of Athletics Federations will not validate the time because of the way the run was set up. The running ground had been readied with features such as a corner which was banked in order to save time and avoid injury.

As for the world marathon record, athletes from Kenya and Ethiopia have been contesting for the ultimate record since the past 16 years. Both the nations are fierce rivals for distance medals on the track.