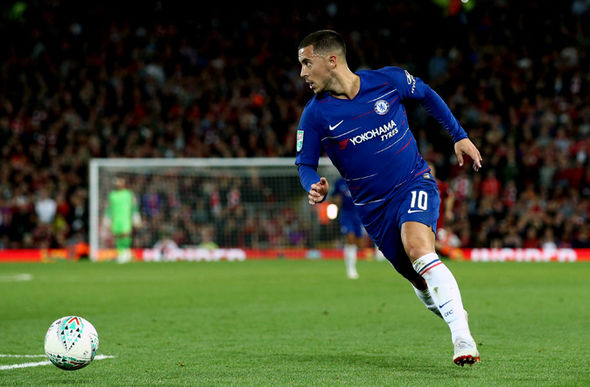 Eden Hazard is in sublime form so far this season and his performances have been of such a high order that pundits and former professionals have been effusive in their praise for the Belgian forward. His wonder-goal after going past 5 Liverpool players on a cup night at Anfield saw him take his goal tally to 6 early in the season. Although it looks to be delightful for Chelsea F.C., Hazard’s career could take sharp bends to come to the transfer windows.

The Belgian’s contract runs till 2020 so unless The Blues get him to sign a new contract soon , Hazard could be on his way out.

Thibaut Courtois left Chelsea for Los Blancos in the summer in a £35million deal and Liverpool legend Jamie Carragher believes Hazard could do the same, although it is thought Chelsea would want a world-record fee in excess of the £198m that Paris Saint-Germain paid to land Neymar from Barcelona.

“There’s definitely going to be a question asked in January or at the end of the season when he [Hazard] will only have 12 months left [on his Chelsea contract],” Carragher said.

“Then you are into that Thibaut Courtois territory and he ended up going to Madrid.” added Carragher.

Fabregas said “It was an easy decision [to keep him], especially now, because at this stage how much can Eden cost?

“Not many teams in the world can buy Eden Hazard. He still had two years left on his contract.

“Next year if he has one year left, that’s a different story. You don’t have as much power as a club. Eden is one of the best players in the world. “