Draymond Green has always been a polarising figure in the NBA, and much of that is due to his ‘expressive’ style of play. Aside from basketball attributes, his personality on and off the court draws quite a bit of attention.

Green recently gave an interview for ESPN the Magazine, and it contained interesting snippets about trash talking some legends of the game. 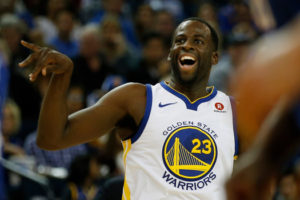 He gave some interesting insight about talking trash to Tim Duncan and Kobe Bryant, two icons of the game. Draymond is quite famous for his vocal presence on the court, but these two did not take any of it.

“The guy I’d never waste my breath on? Tim Duncan,” Draymond said. “As a rookie, I tried talking junk to Tim, and he was like a tree staring back at me. No expression. I said, “All right. It’s over.” Never talked junk to him again. After that, anytime he fell, I’d be the first person to help him up like I was his teammate.”

Green also tried to use his skillset on Kobe but to no avail. “I also tried talking junk to Kobe, maybe my second year,” he said. “On a potential game-winner, Mark Jackson put me in to guard him, and I got the stop. I said, “Yeah, I’m locking that s— up!” He looked at me like I was crazy and said, “That miss ain’t got nothing to do with you. Sit down.” I said, “Oh, s—! All right, I’m out.”

But Green also said that he thinks he is the best trash-talker in the game right now. We’ll surely see him involved in some fireworks soon, right?