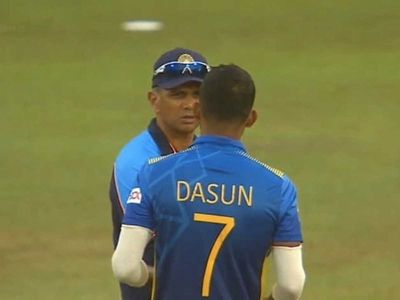 Rahul Dravid has one of the sharpest minds in world cricket. He is an ocean of knowledge and the Indian players are not the only ones benefiting from it. The stand-in head coach of India was seen spending a considerable amount of time with Sri Lanka’s new limited-overs Dasun Shanaka during the rain break in India vs Sri Lanka 3rd ODI at the R Premadasa Stadium in Colombo.

When heavy rains halted play, India were 147 for 3 in 23 overs. After the downpour stopped, the ground staff needed some time to clear the water from the covers.

It was during that time, Dravid was seen talking to Shanaka. It is still unknown what the two were talking about but the chances of it being about cricketing strategies are the highest.

Coincidentally, Sri Lanka had their best period of play in the series after the resumption of the game. The match was reduced to a 47 overs-a-side affair.

The pitch suddenly had a bit of freshness and the ball would both grip and skid, making life easier for the spinners, who rocked the Indian middle-order.

Shanaka led side wreaked havoc in the middle overs.

Indian young batters were not able to cope up with the slow bowlers. They looked completely clueless against left-arm spinner Praveen Jayawickrama (3/59 in 10 overs) and off-spinner Akila Dananjaya (3/44 in 10 overs). Both spinners were playing their first match of the series and made an immediate impact on the game.

young batters not being able to cope up with slow bowlers was on show as the middle-order looked clueless against left-arm spinner Praveen Jayawickrama (3/59 in 10 overs) and off-spinner Akila Dananjaya (3/44 in 10 overs), who, in his second spell, blew away the lower middle order with turn and bounce.

However, before the rain break, Prithvi Shaw (49 off 49 balls) dazzled with his breathtaking array of strokes. On the other hand, Sanju Samson again made batting look easy in his run-a-ball 46 in his debut innings.

Both of them were playing the spinners with utmost ease. They added 74 runs in 13.2 overs. One can’t fault anyone who was dreaming of something big as the duo injected life in a dead rubber.

But Shaw was caught plumb in front of wickets at 49 by captain Shanaka. Before the rain delay, Samson also fell to left-arm spinner Praveen Jayawickrama.

After the resumption, Indian batsmen were simply not able to cope up with the spin and bounce.

India were bowled out for 225. Sri Lanka won the match as they chased down the target with 48 balls to spare (DLS method).