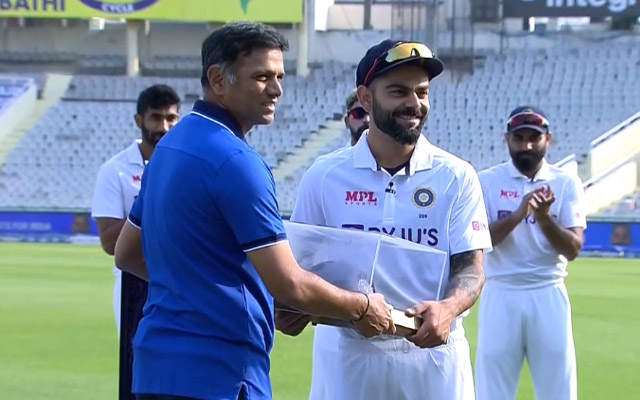 Team India head coach Rahul Dravid handed Virat Kohli a special cap to commemorate the occasion of his 100th Test match. The former India captain will be the twelfth player to represent India in at least 100 matches in the longest format of the game.

The presentation ceremony, which took place before the start of the game, saw a special Test cap, enclosed in a glass case being handed over to Kohli. Rahul Dravid, who is himself a member of the 100 Test club, gave the cap to the newest member with all teammates and Kohli’s wife Anushka Sharma watching from the sidelines. While handing over the cap, Dravid conveyed a few words:

“It’s a testament to everything that is great in our sport… sweat, discipline, courage, skill, determination, desire, focus, you had it all. You had a great journey. You can be very proud of not only playing the 100th Test match but also for the great journey that you have navigated through. Congratulations to you and your family on this fantastic achievement. It’s well deserved, well earned, and hopefully it is just the start of many things to come. As we say in the dressing room, double it up,”

The BCCI released an image of the heart-warming gesture. Watch it right here:

Kohli made his Test debut in the tour of the Caribbean in 2011, three years after making his first appearance in ODI cricket. He took over the captaincy reins in 2014 following MS Dhoni’s retirement from the format.

His captaincy record of 40 wins out of 68 matches speaks for itself, and despite a dip in form since 2019, he still boasts impressive numbers with the bat. Kohli had earlier stated that he was not sure that he would make it to the 100 Test mark. In an interview with the BCCI, he said:

“I honestly never thought I would play 100 Test matches. It has been a long journey. We played a lot of cricket over the course of playing those 100 Test matches. A lot of International cricket. I am just grateful that I’ve been able to make it to 100. God has been kind. I have worked really hard for my fitness. It’s a big moment for me, for my family, for my coach, who is also very happy and very proud of this Test match as long as I am concerned,”

Kohli was set to play his 100th Test in the tour of South Africa earlier this year. However, a lower back injury ruled him out of the second Test, pushing his 100th Test appearance in India. Kohli’s wife Anushka Sharma, his family and his childhood coach are all present at the IS Bindra Stadium in Mohali to witness the landmark contest.

Sachin Tendulkar remains at the top of the list for Test appearances with 200 matches to his name.