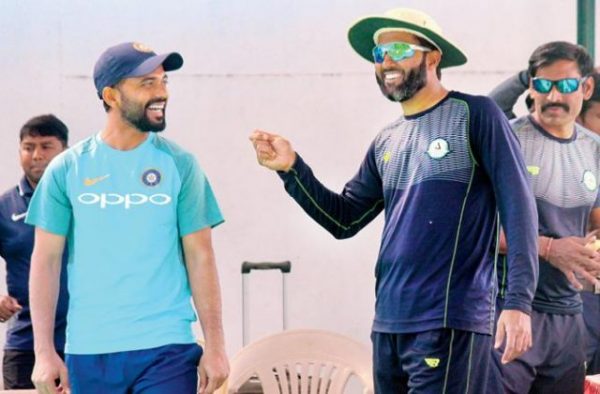 The Uttrakhand cricket board and the entire Indian domestic cricket structure has been hit with the controversy surrounding Wasim Jaffer. Jaffer, who resigned as the coach of the Uttrakhand cricket team over selection bias, has been accused of favouring Muslim players in the team. Vice-captain Ajinkya Rahane was asked to comment on the controversy ahead of the second test.

Rahane claimed that he does not have enough information pertaining to the issue, and as a result, will not be able to answer the question.

The pair have played for Mumbai and the West Zone in the past. Jaffer, who is the highest run-scorer in the history of the Indian domestic circuit, has gone onto refute the claims set by the Uttrakhand cricket association.

He went on to counter the charges laid on him by CAU’s secretary Mahim Verma in a media report. During a virtual press conference on Wednesday, Jaffer denied that he was in favour of Iqbal Abdullah as a captaincy candidate due to his religion.

“The communal angle that has been brought up, that is very, very sad, “They levelled an allegation that I am in favour of Iqbal Abdulla, I wanted to make Iqbal Abdulla as the captain, which is absolutely wrong,”

The former Indian cricketer, who has represented the country in 31 tests, has so far found support in the form of ex-cricketers such as Anil Kumble, Irfan Pathan and Manoj Tiwary.

Despite the ongoing battle in the domestic front, India are gearing up to overturn their 1-0 deficit in the second test. Playing at the same venue, the new track is expected to aid turn from the very first day itself.

The hosts are expected to make one change in the form of Axar Patel, who has recovered from his minor knee injury. The all-rounder is slated to take the place of Shahbaz Nadeem in the playing eleven.

The spotlight also lands on Ajinkya Rahane, who has been called out for his inconsistency by the fans and pundits alike.