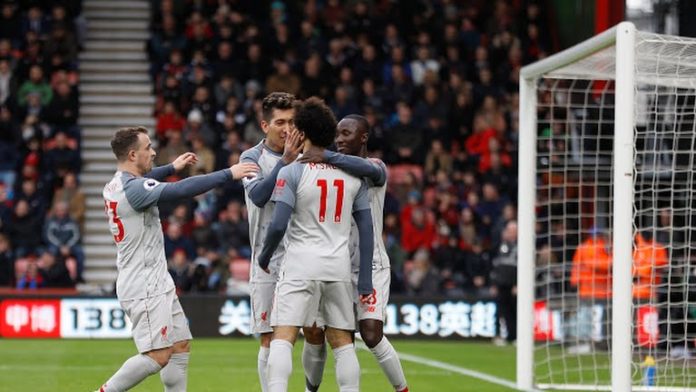 Mohamed Salah’s spectacular hat-trick and an own goal from Steve Cook steered Liverpool to a 4-0 finish. However, Salah’s first goal was surrounded by controversy as the homecrowd of Bournemouth was convinced it was offside.

“We controlled it, all the little runs we made opened up the gaps,” said Jurgen Klopp. “But whatever you do in a football game, you need someone to finish it off, and what Mo did with his goals was exceptional.”

Klopp made five changes today. Most significantly, Salah and Roberto Firmino were restored, back to cause panic in the Bournemouth ranks.

Mo Salah started a little rusty but he made fine use of a rebound shot and parried it into the net.

Salah scored a brace in the second half. Steve Cook hastily gave away the ball to Firmino’s path and Firmino found Salah who sped forward and made quick work of netting the second goal of the night.

Later, Steve Cook in hopes of clearing a cross from Andrew Robertson ended up scooping the ball past Begovic to gift Liverpool their third goal.

Salah then completed his hat-trick by rounding Begovic twice and finally shooting the ball into the net.