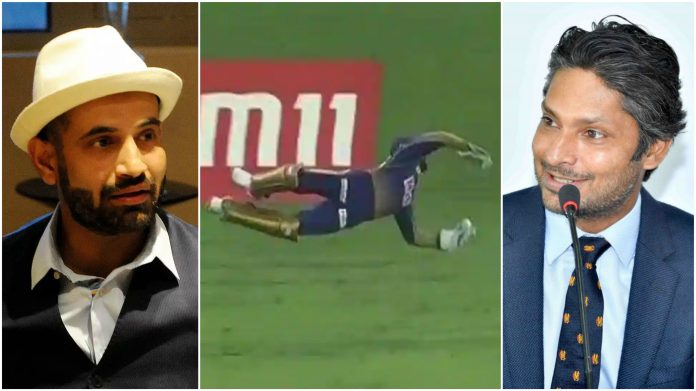 Kolkata Knight Riders have registered a convincing win against Rajasthan Royals and former captain, as well as the wicket-keeper batsman Dinesh Karthik, stole the show when he picked up a stunning one-handed diving catch to sent Ben Stokes in the dugout and turned the table for KKR against Rajasthan in the game of the ongoing Indian Premier League (IPL) 2020 in Dubai on Sunday.

Ben Stokes has been in a formidable form and he has been helping Rajasthan Royals win comfortably for the last two games before Sunday. The all-rounder also smashed a quickfire century and remained unbeaten to help Rajasthan claim a win over Mumbai Indians and then smacked a 26-ball half-century to steer his side to a 7-wicket win over Kings XI Punjab as well.

He came to face Kolkata Knight Riders with a red hot form with the bat on Sunday and the being one of the key players of Rajasthan, the onus was on to provide with the free-flowing scores too while chasing a massive total of 192 in Dubai. And, he didn’t disappoint his fan and the franchise where he started with a maximum.

In the first over of the speedster Pat Cummins, Ben Stokes smashed a fuller delivery for a maximum that left his opponent bowlers stunned as well. However, Cummins had the last laugh as he got an edge of a wide delivery and Dinesh Karthik dived towards his left and plucked the one-handed stunner from mid-air.

What a Catch from Dinesh Karthik 😮, Flying like a bird , Simply Outstanding , Cummins On fire 💥 | #IPL2020 | #KKRvRR | #KKRHaiTaiyaar pic.twitter.com/XkLoJhjs7z

While everyone was praising Karthik for the catch, former Sri Lanka wicket-keeper batsman Kumar Sangakkara also applauded his effort from the commentary box, saying: “Ben Stokes couldn’t believe it and neither can we in the commentary box.”

Former India all-rounder Irfan Pathan also praised his one-handed stunner. “We’ve seen birds on the cricket ground only in Australia… there’s one that flew in the UAE just now … what a catch,” tweeted Pathan.

His dismissal left the team in the struggle as their other top-order batsmen failed to contribute much and reduced at 37/5 with Cummins claiming four wickets as well. They managed to put up 131 for 9 and KKR won the comfortably by 60 runs. Meanwhile, with this win, KKR kept their hope alive to be featured in the playoffs this season.