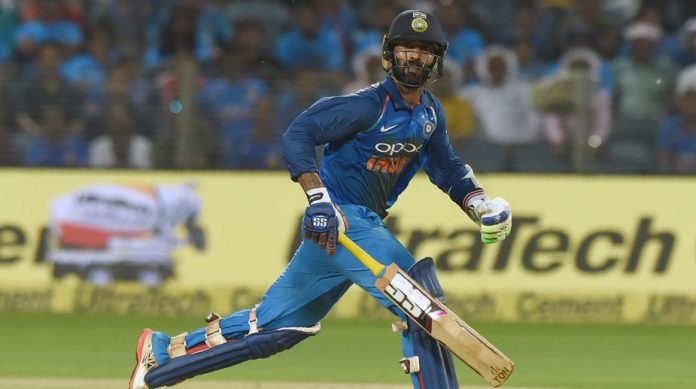 The fateful cloudy afternoon in Manchester two years ago remains the last time Dinesh Karthik donned the Indian colours. He is, however, optimistic about making a comeback into the team in his twilight years.

The former KKR skipper has been an on and off prospect in the Indian team playing various roles across his 15-year stint. While the wicket-keeper batsman has now even switched to commentary, he still has an eye on representing the nation at the highest level.

Karthik’s last comeback into the Indian team was on the bank of his finishing credentials which eventually helped India nab the Nidhas Trophy. He still continues to ply his trades for domestic sides and even the IPL, where he acts as the vice-captain of the Kolkata Knight Riders.

During a recent interaction with Gaurav Kapoor for the ’22 Yarns Podcast’, Karthik claimed that fitness is the key to his future with the game. If fit, the 36-year-old aims to represent either in the upcoming T20 World Cup in UAE or the next one in Australia.

“I want to play the sport as long as I am fit. I want to represent India in at least one World Cup of the next two, I think one is in Dubai and the next is in Australia. I had a fab time with the Indian T20 team till the time I was dropped due to an unsuccessful World Cup campaign,”

Karthik also went on to explain why he can be an asset for the present Indian T20 side. He brought out India’s need for a ‘true’ middle-order batsman, with the current side filled with top-order batsmen trying to squeeze down the order.

“They have a lot of top-order batsmen who they slot in the middle-order. Barring Hardik Pandya and Ravindra Jadeja there is no one who is a middle-order batsman. They all bat for their franchises from opening to No.3, with only exception being Rishabh Pant who bats at No.4.”

The management already have the core and the skeleton of the side in place for the T20 World Cup. While the inclusion of Karthik seems highly unlikely, he could slot in as a third-choice wicket-keeper behind Rishabh Pant and Sanju Samson or Ishan Kishan or a finisher given how his and his compatriots’ IPL campaign goes.