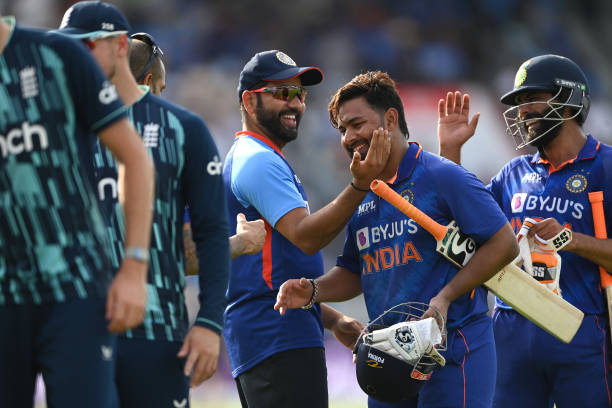 Team India captain Rohit Sharma lavished praise on the match-winning duo of Rishabh Pant and Hardik Pandya. The pair took India to victory with a mammoth 132-run partnership for the fifth wicket in the third ODI against England in Old Trafford, Manchester.

Reeling after yet another top-order collapse, India were once again heavily reliant on their middle-order in pursuit of 260 runs in the run chase. Tottering at 72-4 at one stage, Pandya and Pant scripted a memorable stand to record India’s first ODI series win in England in eight years.

The wicket-keeper batter went on to register his maiden ODI hundred and remained unbeaten till the end at 125. Hardik Pandya, on the other hand, departed after a well-made 71.

Sharing his thoughts following the 2-1 win in the three-match ODI series, Rohit Sharma said during the post-match presentation:

“We were here last time and were beaten, I remember that. Not an easy place to come and win games. It was a good pitch, but we do understand it’s not going to be easy if we lose wickets upfront. Positive side of it, these guys haven’t batted much in the middle overs. Today we got to see that with Hardik and Rishabh. At no point we felt they were panicking. They backed themselves and played cricketing shots,”

While the middle-order batters played with composure, the same cannot be said for those who faced the new ball. Rohit Sharma, once again, looked unsettled against left-arm pace bowling while Kohli’s woes outside the off-stump also persisted.

Claiming not to be concerned about the form of the top-order batters:

“We played some not so good shots. Still back those guys to come out good. One of those series where top order hasn’t come to the party. Have got nothing more to say because I know the quality they bring to the team.”

After wrapping up the tour of England with a second consecutive series win, Team India are next scheduled to face West Indies in a white-ball tour. The Men In Blue will play three ODIs and five T20Is, beginning from July 22.