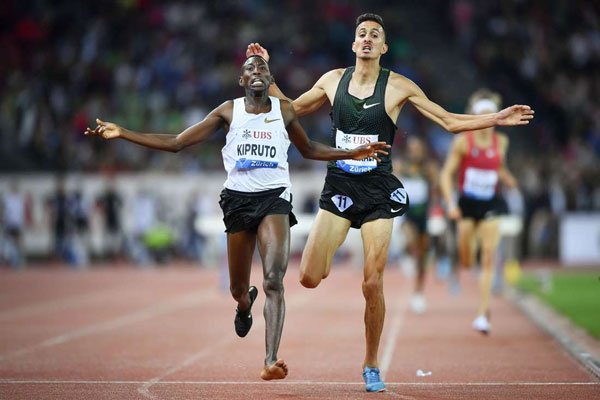 Kenyan Olympic champion Conseslus Kipruto on Thursday won the men’s 3000m steeplechase race at the Diamond League in Zurich. He completed more than six laps worth of barriers and water jumps in a close contested run.

The Olympic champion finished in 8:10.15 and narrowly edged out Moroccan Soufiane el Bakkali who finished at 8:10.19. 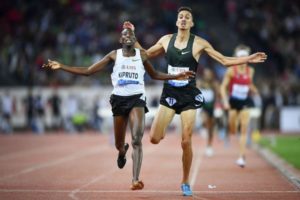 The Kenyan Olympic Champion told the organizers of the Diamond league that, “I have big pain. I am injured because I lost my left shoe. That was a mess, but it motivated me to fight as hard as I could, so the race went well.”

In a dramatic and high voltage show in the Swiss city of Zurich, Kipruto’s shoe came off after only 1 minute 24 seconds into the race, and for the remaining six minutes and 54 seconds, the Kenyan runner didn’t faze and he kept maneuvering the track in a single shoe to the dumbfounded amusement of fellow contestants and spectators in the stadium alike.

Our indomitable spirit, determination and strength of character were in display at the Diamond League Final in Zurich as Conseslus Kipruto won the 3,000m steeplechase with one shoe on! Kudos to Hellen Obiri and Timothy Cheruiyot for winning the women’s 5,000m and men’s 1,500m. pic.twitter.com/7KaYhiq4ZB

Running with one shoe for most part of the race, Kenyan Olympic Champion Conseslus Kipruto won the men’s 3000m steeplechase race at the Diamond League in Zurich. What an athlete!!!
ONE LOVE YOURE OUR HERO KIPRUTO pic.twitter.com/wPp3mV7e7U

Nowadays when i see a kenyan athlete trending i get worried, congratulations "Conseslus Kipruto"

Not only did he chase down his opponent to win this race, he did it with ONE SHOE.