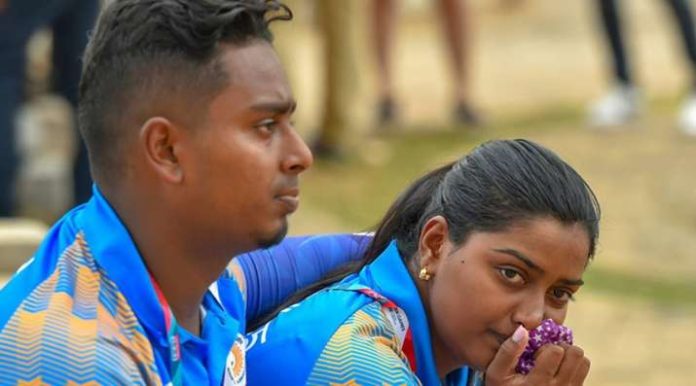 Deepika Kumari and Atanu Das, the renowned archer couple who have been a staple behind the upliftment of the sport in the country, were recently excluded from the Target Olympic Podium Scheme (TOPS) program of the Ministry of Youth Affairs and Sports. The archers did not meet the expectations as they produced lacking performances in the national ranking tournament.

“Considering their below-par performances in the event, MOC decided to not include them in the TOPS list for now,” an official statement from the Sports Ministry read. [H/T Sportstar]

Deepika and Atanu failed to meet the expectations at the Tokyo Olympic Games last year, followed by another bland performance at the World Cup Finals in Yankton, USA back in October last year.

Despite their contributions behind archery in India, the ministry took the decision to omit them from the scheme and the same was disclosed to the couple by MOC members of the MOC, Sports Authority of India and Archery Association of India officials.

“I appreciate that SAI officials informed me before the MOC meeting itself that there was a possibility of me being excluded from the TOP Scheme. I will be motivated to return with good scores in the competitions ahead,” said Deepika. [H/T Sportstar]

“We were very disturbed that we could not get the results we wanted in the Olympic Games. And we took a break from competitive archery after the Olympic Games. I know it is a matter of time before we find the form and get back to where we belong,” Atanu added. [H/T Sportstar]