The twelveth edition of the IPL (Indian Premier League) is in full swing and Australian opener David Warner who will be playing for Sunrisers Hyderabad is all set for an incredible season.

Warner is back playing in the IPL after the ball-tampering scandal in South Africa last year which saw him being suspended from the Australian national team. Warner’s team SRH will play against KKR at the Eden Gardens in the opening match. 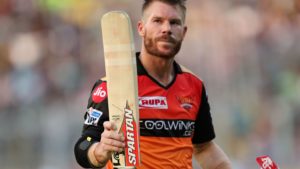 However, ahead of the IPL 2019, Warner said that he was thankful to the SRH family for the warm welcome and it meant the world to him.

“It’s very important. It is one tournament on the calendar that I’ve always been looking forward to. I’ve had a lot of success over the years from when I first started.

“From Delhi, I moved to Hyderabad. This is my second home and to come back here to open arms and to be greeted with the fans, some of the passionate and kind words, it means a lot to my family and myself. I’m just looking forward to the start of the tournament and playing and trying to go one step further from where the guys just couldn’t get further last year,” Warner told India Today.

“The fans have been fantastic. My teammates, lots of cuddles and high-fives… it’s been brilliant. It felt like I was at home I can’t thank them enough for sticking by me and always sending me nice messages. It would be wrong for me to say I wasn’t emotional. I texted my wife and said ‘look I can’t get the smile off my face’. Because it’s my second family, it was literally overwhelming because I’m back where I feel like I’m at home,” the SRH opener added.

He also said that he was also thankful for the support he had received over the past 12 months.

“I was just so thankful and grateful for the support the Sunrisers family and chairman and his wife and daughter showed to me in the past 12 months and I’ll forever be grateful for that. The whole entire team was sending me nice messages and I was on group chat throughout the tournament last year as well. I was very thankful and pleased to be a part of that because I felt like I was there when I was watching it,” Warner said.