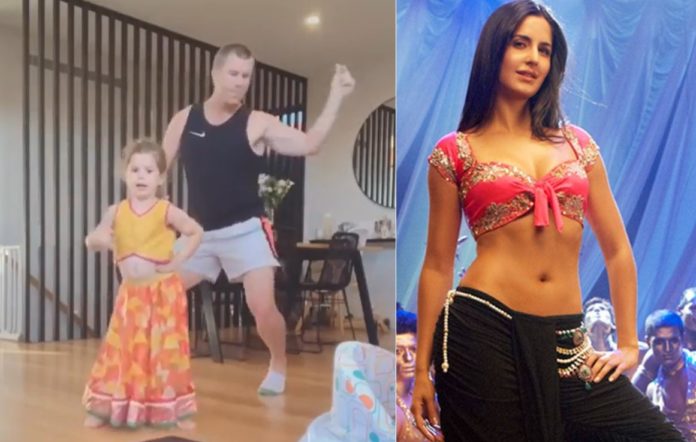 It seems that Australian opener David Warner is making the most out of the quarantine period with his family. The swashbuckling southpaw made his debut on social networking app Tiktok earlier this week, but on Saturday, Warner won the internet after posting a video, where he could be seen shaking legs with his younger daughter Indi-Rae on the Bollywood popular song ‘Sheila ki Jawani.’

In the hilarious video, Warner’s younger daughter Indi was seen donning an Indian dress and dancing with her father to the superhit number ‘Sheila Ki Jawani’ that features Katrina Kaif.

“Indi has asked to also do one for you guys! please help me someone.” Warner captioned the post.

The 33-year-old then uploaded a short clip of his dancing prowess on his Instagram account while it gathered over 250,000 views under an hour.

Earlier this week, Warner took to Instagram to share the news of his Tiktok debut in a video along with his two daughters Ivy-Mae and Indi.

“Ok, I have zero idea what’s going on but have been told to do tik tok by my 5 year old @davidbullwarner31 and I have zero followers I need some help please and they love @tonesandi,” Warner wrote beneath the post.

😂😂 somebody help us please!!

Sunrisers Hyderabad’s marquee opener was supposed to lead his team in the 13th version of the Indian Premier League, but the ongoing global coronavirus pandemic has led to the cancellation of the tournament.

Meanwhile, the Board of Control for Cricket in India (BCCI), on Thursday confirmed that the cash-rich league has been postponed indefinitely.

“Due to the evolving global health concerns regarding COVID-19 and lockdown measures implemented by the Government of India to contain the spread of the pandemic, the IPL Governing Council of the BCCI has decided that the IPL 2020 Season will be suspended till further notice,” Jay Shah, the BCCI Honorary Secretary said in a press release.