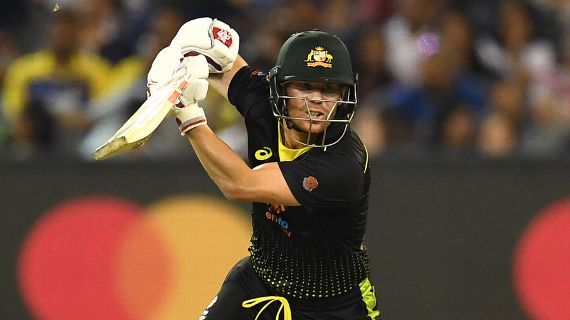 After a disastrous Ashes campaign earlier this year, Aussie opener David Warner bounced back to form with three match winning performances against Sri Lanka in the recently concluded T20I series. The left hander demolished the Lanka boys all by himself, scoring 217 runs in 3 matches without even getting dismissed in those games.

Warner smashed a swashbuckling 56-ball 100 in the 1st T20I in Adelaide, and helped his team easily chase down a mere target of 118 in the 2nd fixture in Brisbane; scoring 60 from 41 deliveries. Today, in the final match of the series at Melbourne, he yet again played the anchor role remaining unbeaten at 57 while Australia completed their whitewash over Sri Lanka.

And with these sublime performances, not only he was judged as the man of the series but created a number of records as well; being the first ever opener to remain unbeaten in all 3 games of a 3-match T20I series and the 1st Australian to score 2000 runs in T20I cricket. He also became the 3rd batsman in international cricket to record three consecutive fifties in a bilateral T20I series.

Lanka series done, and now Warner will be eager to continue his destructive form when Australia take on Pakistan in a 3-match T20I series which starts from Sunday.