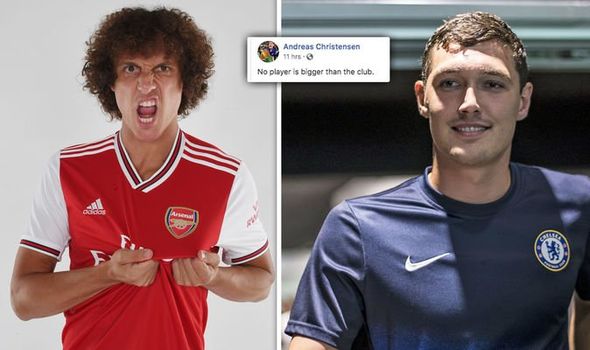 David Luiz’s departure from Chelsea FC earlier this season wasn’t in the best of circumstances. Some fans took it normally and some were understanably enraged. The biggest issue started when a post by what seemed to be Andreas Christensen on facebook became viral.

The post read “No player is bigger than the club” and was right when the David Luiz transfer was announced. However , it was from a not verified account , pretending to be the Brazilian’s teammate Christensen.

Christen was quick to call up Luiz and let him know that he had nothing to do with so and so post. No love lost!

On leaving the Blues, Luiz revealed: “The cycle finished [at Chelsea]. It was a conversation between me and Chelsea and everybody.

“I had an opportunity to come to another big club. In my life, I’ve always liked to do some challenges.

“I’m not scared at all to try things.

“I think not too many players would make this kind of move, they would maybe be scared, or something like that.

“I’m just trying to do big things in my life, so like I said, my cycle at Chelsea finished and now I’m excited to start a new chapter of my life here.”