Manchester United and David de Gea have been under contract negotiations for quite some time, but nothing concrete has emerged. Reportedly, United have given an ultimatum to the Spaniard to decide on his future. 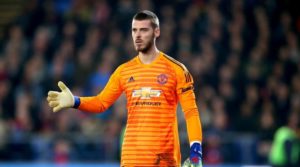 According to the Daily Mail, United have offered him a new contract with wages of £350,000 per week. De Gea has been given a week to decide his stand on the offer. His current contract expires in 2020, but he has not been close to signing an extension.

De Gea has been a stellar performer for United over the years. He was signed by Sir Alex Ferguson in 2011, and he has improved consistently. He has been among United’s best players consistently and has a host of trophies in his collection.

But his form has dropped this season, particularly in recent weeks. Mistakes in high-profile games have brought him under public ire. He has been linked with other clubs, and United are keen to sort out the contract as soon as possible. Paris Saint-Germain are one of the suitors for De Gea’s services.

Manager Ole Gunnar Solskjaer has full confidence in his goalkeeper, but De Gea needs to make a decision regarding his future in the coming days.