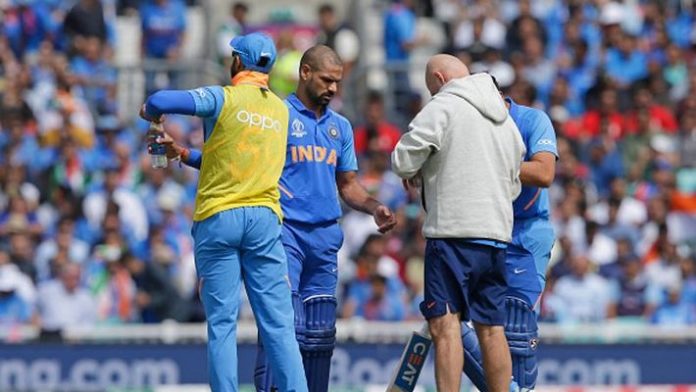 In a devious blow to Team India, opener Shikhar Dhawan has been ruled out for three weeks after suffering a blow to his thumb during his match-winning knock against the Aussies.

Shikhar Dhawan was hit on the thumb by a delivery from Nathan Coulter-Nile which he fended off awkwardly. The opener did not take the field during the second innings and was seen with ice-pack on his thumb.

Dhawan reportedly underwent scans on Monday which revealed a hairline fracture. As per the team management, the flamboyant batsman could be well out for 3 weeks or a month.

It has been reported that Dhawan has not travelled along with his teammates to Nottingham for the clash against New Zealand. The final decision regarding this will be declared once the final assessment is finished.

As a result, he is set to miss clashes against New Zealand, Pakistan, West Indies, Afghanistan, and England.

Since this is a big injury, the team will be entitled to a replacement. Rishabh Pant or Ambati Rayudu would be considered if the worst case scenario occurs.

As for the upcoming matches, KL Rahul will likely be promoted to open the innings alongside Rohit Sharma while either Dinesh Karthik or Vijay Shankar would be called up to play in the middle order.