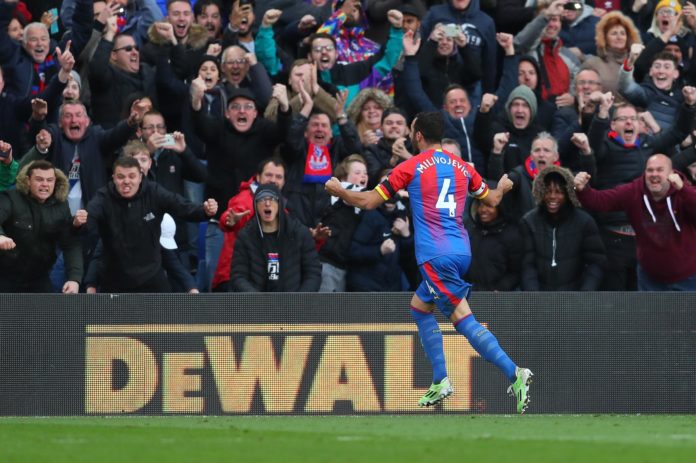 The double from the midfielder represented Palace’s first home league goals of the season, while Arsenal’s 11-match winning streak in all competitions has now come to an end. Milivojevic netted the first and last goals of the game – either side of efforts from Granit Xhaka and Pierre-Emerick Aubameyang – to secure a deserved share of the spoils for the home side.

Milivojevic had missed from 12 yards against Everton last weekend, but the Serbian made no mistake on this occasion as he rolled a low effort just inside Leno’s right-hand post.

Arsenal needed to improve after the restart and after a lively opening to the second half, Xhaka netted a stunning equaliser for his side as his free kick from the corner of the penalty area found the far top corner via the inside of the post.

The visitors held the dominance and it took just five more minutes to complete the turnaround, although their second came in controversial circumstances.

An inswinging corner was flicked towards the back post by the hand of Lacazette, and Aubameyang was waiting for all on his own to prod the ball just over the line.

Palace found themselves on the back foot and struggling to create anything in the final third, but a cross from substitute Max Meyer struck the outside of the post and went to safety.

Oezil was substituted midway through the second half and the German threw the captain’s armband into the dugout after an ineffective display, and Unai Emery’s mood would not have improved when his side conceded a second penalty of the afternoon.

Xhaka dangled out a leg when Zaha opted to take him on in the box and from the resulting spot kick, Milivojevic powerfully lashed a strike past Leno for his second of the match.

Both teams rallied as the searched for a fifth goal of the game, but a draw was probably a fair result after a clash which included a number of important decisions which will be contested by both managers.