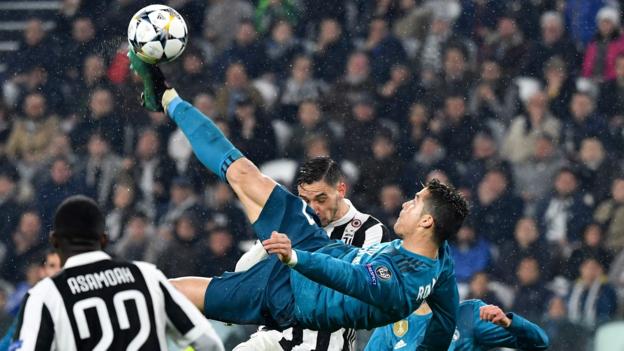 Cristiano Ronaldo has scored many astonishing, world-beating goals but his favourite as he recalls is his sensational overhead goal against Juventus. However, the Portuguese superstar wouldn’t trade his time with girlfriend Georgina Rodrigues for that goal.

Speaking to Piers Morgan in an interview on ITV , the 34-year-old has admitted the goal against the Old Lady was his favourite, but said he didn’t rate it above his experiences with Rodriguez between the sheets.

“No, not [when compared] with my Geo, no!” Ronaldo said as he laughed at the question from Morgan.

“I tried to score this goal for many, many years,” Ronaldo said. “I had scored 700-odd goals but I hadn’t done this. I thought, ‘Finally I had scored a bicycle, the beautiful jumping’.

“The way I had done against [Gianluigi] Buffon, against Juventus, in the Champions League. It was a beautiful goal.”

Ronaldo vividly remembers the goal because it brought him applause from even the opposition fans.

“When the people start to applaud me in the stadium I was like, ‘Wow’,” Ronaldo told DAZN last year.

“[It] surprised me a lot because this has never happened in my life, so [it] was [an] unbelievable moment.”