Christiano Ronaldo has firmly established his status as Mr. Champions League. He has continually broken existing Champions League records and set new ones that might take some time to break. The Portuguese captain is one of the most successful players in the tournament, having won it five times and scored more goals than any other player.

Cristiano Ronaldo made his Champions League debut in the competition in 2003, aged 18. The person he considers his football father, the legendary Sir Alex Ferguson, handed Ronaldo his debut when Manchester United faced Stuttgart. 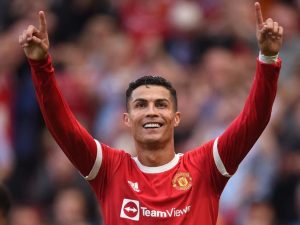 From there, he never looked back! He has worked hard to become one of the most successful players in the tournament. Moreover, he has become a favorite of many sports betting fans for his game-changing ability. You can click here for a list of online sportsbooks offering top sports betting services. Which Ronaldo’s records do you know?

Ronaldo’s achievements in this tournament are well documented as he has continually broken several records initially held by other football legends. So, what records does the football GOAT own?

Spanish legendary goalkeeper Iker Casillas held the record of most appearances in the competition. However, Ronaldo drew level with him when he started for Manchester United against Young Boys. However, Ronaldo’s celebration was dimmed by United’s loss to a resolute Young Boys.

Besides that, he scored in that match and, in the process, equaled another record by becoming the second player to score against 36 different clubs in the Champions League. The player that held the record was his great rival, Lionel Messi.

Ronaldo broke Casillas’ record when he played for United against Villarreal, meaning he now has 138 appearances, one more than the Spaniard, who has since retired. On the other hand, Ronaldo is almost sure to make it 179 when United invite Atalanta to The Theater of Dreams.

Some of the greatest football players have graced the Champions League competition. Names like Andriy Shevchenko, Raul, Lionel Messi, and Cristiano Ronaldo come to mind whenever you think about the deadliest goal scorers that have played in the competition.

However, in any competition, there is always one player that stands out from the rest. At the moment, Cristiano Ronaldo and Argentine superstar Lionel Messi have pulled away from the rest, with Ronaldo leading the way with 136 goals. Messi is a distant second with 121 goals and would need Ronaldo to stop scoring for him to catch up. But as things stand, that seems impossible!

The Only Player To Score In Three Champions League Finals

Cristiano Ronaldo became the first player to score in three different UEFA Champions League finals. He made history in the 2017 final between Real Madrid and Juventus. It took the goal scoring machine only 20 minutes to achieve this significant milestone. Real eventually won the match 4-1, lifting the trophy that season.

He also scored a second goal to become the tournament’s top scorer that season, with 12 goals overtaking his fierce rival Lionel Messi. He had previously scored for Real Madrid when they overcame Atletico Madrid 4-1 three years back. Additionally, Ronaldo scored in Manchester United’s 1-1 draw with Chelsea in Moscow in 2008.

Initially, the record was held by Raul Gonzalez, who held the record of the first player to score in two UEFA Champions League finals. Eto and Lionel Messi were the other players to have scored in two different finals.

There is a fierce battle between Messi and Ronaldo this season as both look to inspire their teams to the Champions League final.

Mr. Champions League is also the only player to have scored in all the six Champions League group stage matches. In the 2017/18 season, while still at Real Madrid, Ronaldo scored twice both home and away against APOEL, once against Tottenham Hotspur home and away and scored a brace and once against Borussia Dortmund to end with goals in all six games.

PSG’s Neymar Jr. missed the opportunity to score in all six UEFA Champions League matches. In that season, Ronaldo scored 9 goals for Real Madrid, who ended Group H as runners-up.

Apart from the records mentioned above, Ronaldo holds several other UEFA Champions League records. They include: