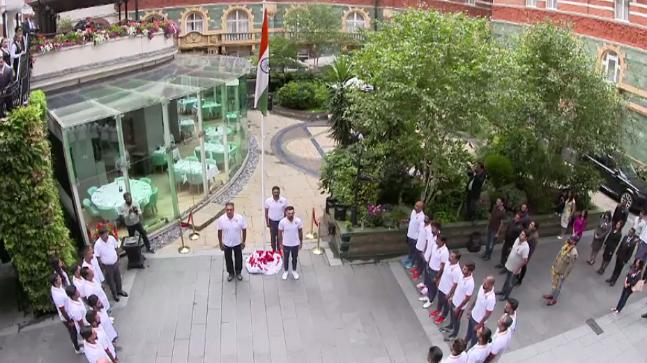 The Men In Blue hoisted the Indian flag outside their hotel in London on the occasion of the country’s 72nd Independence Day, with captain Virat Kohli and coach Ravi Shastri leading the way. The team left for Nottingham after the ceremony to proceed with the preparation for the third test against England at Trent Bridge.

Virat Kohli sent a message to all the patriots out there after the flag hoisting ceremony. Kohli said:

“On behalf of the Indian cricket team all the way from the UK, here’s wishing everyone a happy Independence Day. Jai Hind,”.

The BCCI posted several snippets from the morning on their Instagram feed along with the entire video on their website.

Members of #TeamIndia came together to hoist the Tricolour in England. Have you watched the video already? Check out our story to watch the full video 🇮🇳🇮🇳🇮🇳 #HappyIndependenceDay

The team continued the proud tradition of hoisting the tricolour despite being away from the country. Last year, the squad hoisted the Indian flag in Sri Lanka.

#TeamIndia gathered at Kandy to hoist the tri-colour on the occasion of Independence Day #IndependenceDayIndia https://t.co/SyRLmE4Let

Several members of the squad took to social media on the patriotic eve including Kuldeep Yadav, Ravindra Jadeja and Jasprit Bumrah.

It's a great feeling to be an Indian. May the tricolour always fly high. Happy Independence Day 🇮🇳 Jai hind ! pic.twitter.com/qtKTfxP09D

"Freedom is nothing but a chance to be better". 🇮🇳
Wishing you all a very #HappyIndependenceDay pic.twitter.com/VXAyUSuVCb

Trouble all over the place for India

The team head into the third test with several concerns which include poor form and injuries. The batting unit is yet to turn up in the series so far has failed to settle in the typical English conditions.

Injury concerns to Virat Kohli, Ravichandran Ashwin and Hardik Pandya also adds the pressure on the Indian side who are already 2-0 behind in the five-match test series. Virat Kohli is currently dealing with a bad back whereas Pandya and Ashwin were prone to several blows on their fingers during their time out in the middle.

Changes are on the cards for the Blues with the focus, particularly being on the batting line-up. Whereas the England line-up looks settled having decisively beaten India by an innings and 159 runs at Lord’s. Moreover, the hosts are strengthened with the return of all-rounder Ben Stokes who was not charged guilty after a week-long trial that forced him out of the Lord’s test.

Cricket: Virat Kohli takes to social media to cheer up his fans