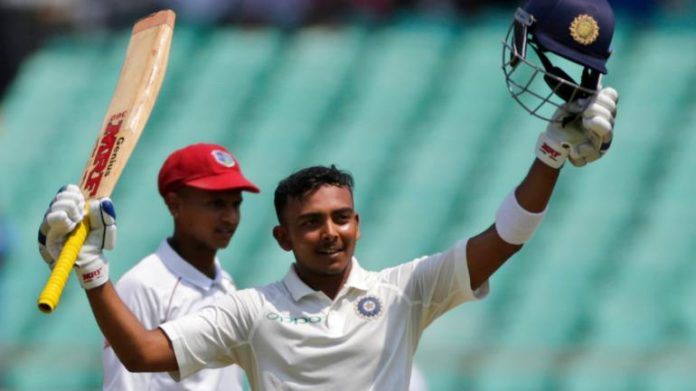 Team India ended the first day’s play in a commanding position as they went into stumps at 364-4, following Prithvi Shaw’s century on debut earlier in the day. 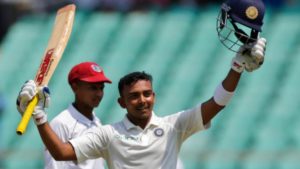 Virat Kohli who had won the toss on a hot and humid day at Rajkot wasted no time but to bat first in order to make use of the favorable conditions. The hosts left out Shardul Thakur from the 12 men squad that they had announced yesterday. West Indies on the other were fielding a rather inexperienced side with Jason Holder and Kemar Roach missing from the squad.

Coming on bat, India lost KL Rahul in the very first over for a duck after Shanon Gabriel trapped him plum in front of the wickets. His partner Shaw then joined hands with Pujara to build a solid partnership for the second wicket. India went into lunch at 133-1 with both having scored their half centuries.

Returning from the break, Prithvi Shaw completed his century in quick time becoming only the 18th Indian batsmen to score a century on debut. Also he became the 2nd youngest to score a century for India after the great Sachin Tendulkar.

Pujara was unlucky to miss out on a deserving hundred after he fell for 86 to Lewis. Shaw departed soon, after making a well deserved 134. Captain Kohli then joined hands with Vice-Captain Rahane to continue the innings.

The Kohli-Rahane duo then put on a 105 run partnership to put the hosts in a commanding position before Rahane fell for 41, once again failing to convert his good start. Kohli then along with Rishabh Pant saw off India to stumps without losing no further wickets. Kohli now stands on 72*, hoping to convert the score into yet another big one tomorrow.