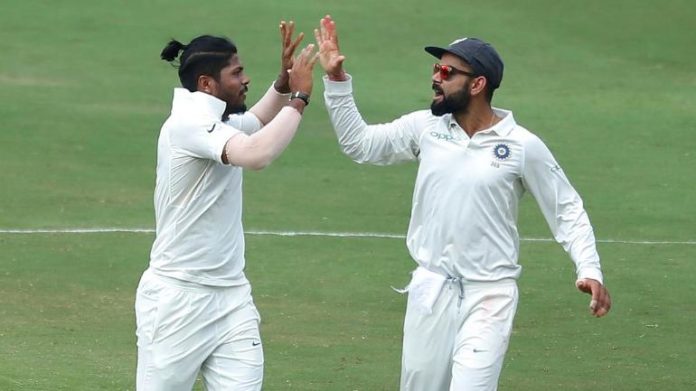 Indian captain Virat Kohli praised his fast bowler, Umesh Yadav, after he picked up 10 wickets in the recently concluded test match vs Windies at Hyderabad. “I think it was a standout performance in his career and something that he can build on,” said Kohli in a press conference after the conclusion of the game. 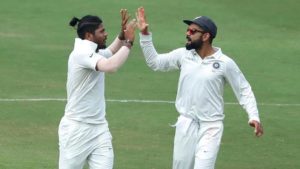 Kohli, who addressed the media following India’s victory, backed Umesh to thrive in the challenging Australian conditions next month. “Four Tests in Australia can be brutal because the (Kookaburra) ball does not do much like in England. So you have to come in and run in all day and hit the right area with pace. But I think from that point of view, Umesh is right up there to be featuring in Australia,” said Kohli in the press conference.

Virat felt that Umesh, who is hitting the form of his career was a good headache with the likes of Mohammad Shami, Ishant Sharma and Bhuvneshwar Kumar already in the ranks.

“Because he (Umesh) has got the pace, he has got the fitness levels to run in all day, picks up wickets at crucial times and he gets good bounce as well, so it’s a great headache to have. Obviously, all four guys, when they are touching 140 and when they are taking wickets for you, it is obviously something that any captain would like to have.”

Continuing his praise for the fast bowler, Virat then added that he bowled brilliantly well without a partner to complement him and had come to point of understanding test bowling.

“I thought with Shardul breaking down very early, to bowl like that in both innings was a great effort on his part. It showed the kind of fitness levels he had, to keep running in and bowl 140 clicks throughout the game and picking wickets and not just completing overs,” said Kohli.

“Not many people realise but he is a very, very talented bowler. He can bowl you unplayable deliveries every now and then which we experience in the nets all the time. He will just bowl a ball which you feel you couldn’t have done anything else except getting out. He is gaining more confidence about his own game. He has come a long way. It’s a great sign. Bowling is something that we need to keep as a major strength for us in order to feel that we have a chance to win series when we travel away from home as well. I think these guys are taking responsibility well,” said Kohli.