Indian captain Virat Kohli who is currently in Southampton following the conclusion of the 4th test vs England received a customised jersey from the Premier League club, Southampton FC. 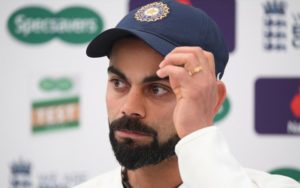 The jersey was presented by their club forward Danny Ings. This was after team India suffered another narrow defeat to the host’s thereby surrendering the series with a game left.

“It was great to welcome Virat Kohli and BCCI to Southampton last week!” read the tweet posted by their club handle.

It was great to welcome @imVkohli and @BCCI to Southampton last week! 😇 #saintsfc pic.twitter.com/6apz5IpQus

Meanwhile, reflecting on the bitter defeat the Indian skipper said, “I thought England did well to give us that target. They batted well in third innings. Seeing how the pitch was, how the ball was turning, they applied themselves and got to a total that was challenging. Thought we were in with a fifty-fifty chance last night. Didn’t get a good start, England applied a lot of pressure.”

“All in all it was a challenging day, we put our best foot forward but it wasn’t good enough. Don’t think we made too many mistakes today. Credit to them. We never thought like that (of an impending collapse). Me and Jinks did well with that partnership, but if you don’t have a partnership before or after it becomes difficult. But we were always under the pump. The pressure was non-stop. We felt the passion of eleven players on the field, wanting to win the Test match for their country,” he added.

The 2 teams are set to face each other for one final time in this series at the Oval on Friday. With series already in the bag, England will look to finish the series in style and give Alastair Cook a fitting farewell.

England vs India: Indian legend calls for the axing of three players from the Indian squad