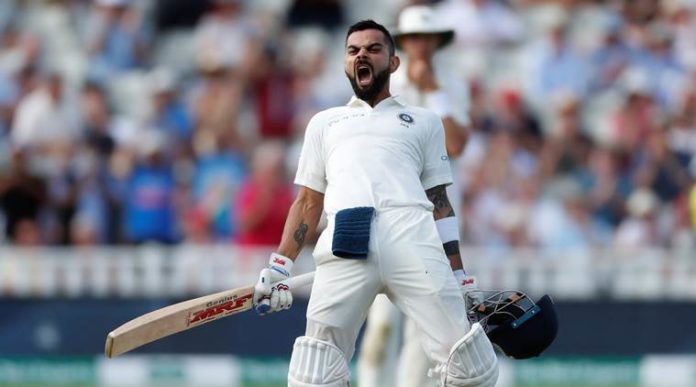 Indian captain Virat Kohli scored a magnificent knock of 149 leading his team from the front in the first test v England. 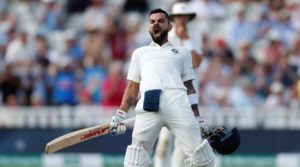 At a point when India were on a verge of conceding a lead of over 100 runs, Virat shouldered the responsibility building partnerships with the lower order and reaching a century at the same time.

This knock of 149 saw his surpass his total score of 134 scored in 2014 in just one innings. Virat had a horrid time in 2014 with his average reading just 13.4. Putting an end to all the speculation surrounding his poor form in England, he scored a scintillating 149.

When asked about if this was one of his best knocks of his career, Kohli stated that he still rated the 141 scored against the mighty Aussies in Adelaide as his best knock.

“This knock could probably come in second to Adelaide. It still remains very special to me because it was the second innings and we were chasing a target. I had clarity that we are chasing a target and not once did I think that we’re not. It is a beautiful zone to be in and today I’m very happy and very grateful to have the opportunity to help the team this way and pull us back in the Test. We’re here to compete, we’re here to fight and we’re going to continue to do that,” he said at close of play to BCCI.TV.

Kohli further clarified that he put team’s performances as his first priority even though he faced an equal pressure on himself to score in England.

“I try to prepare the best way possible that I can and help my team as much as possible. It wasn’t only about getting to the three figure mark but continue from there on. I was very disappointed when I got out as well because I thought we could have taken a 10-15 run lead.”

“But in hindsight we wouldn’t have been able to bowl so just accept what god has blessed on me. I am very happy with my preparation and not worried about the world,” he said.

India are now set a stiff target of 194 to chase in order to win the first test. It will be interesting to see which team will come on top and clinch the all important win. Let’s wait and watch.