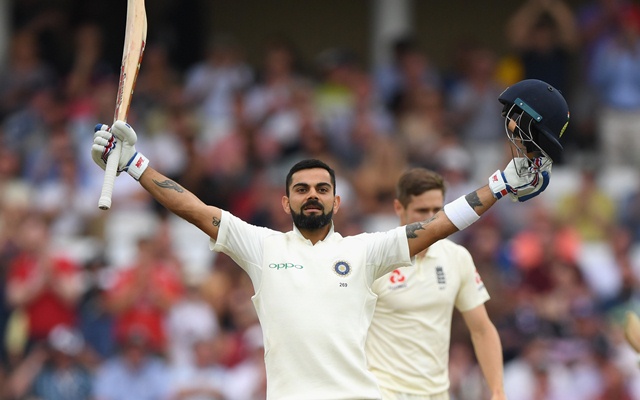 Indian captain Virat Kohli became the first test captain to score 200 or more runs in a winning cause seven times as India registered a huge win by a margin of 203 runs vs England here at Nottingham. 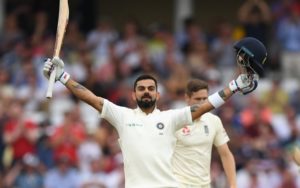 By achieving this feat seven times, Virat overtook some Australian legends such as Ricky Ponting and Sir Donald Bradman. The two great Australian cricketers had achieved this feat six times each. Among Indian captains, apart from Virat only MS Dhoni had recorded this stat, when he scored 223 vs Australia in Chennai.

Also the 200 runs Virat secured in the 3rd test marks the tenth time he has achieved the feat of scoring more than 200 runs in a match – which also happens to be a record in Indian cricket. He also became the first player to score centuries in a winning cause across he nations England, Australia, South Africa and New Zealand.

Virat Kohli has been in scintillating form in this test series so far. After scoring just 134 runs in 10 innings combined in 2014, he had to prove himself that he could play in such conditions. He did that so in style scoring a 149 and 51 in the first test even though India ended up on the losing side.

In the recently concluded test, he again amassed 200 runs scoring 97 and 103 in both innings which earned him a man of the match award. His recent set of knocks has drawn comparisons with the great Sachin Tendulkar.

Will he eventually go on to become a player who’ll ultimately beat Sachin’s records? Lets wait and watch.

Cricket: India stay alive in the series after they beat England by 203 runs