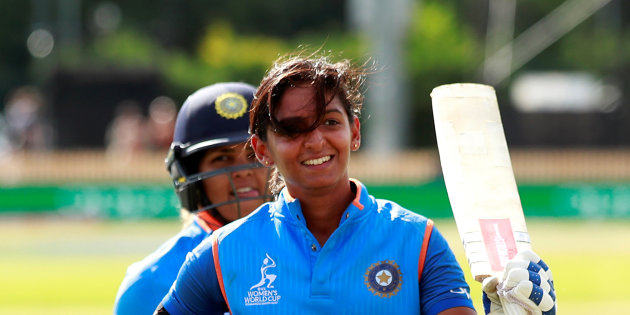 Indian women’s team captain, Harmanpreet Kaur got the ICC Women’s World T20 in the Caribbean off to a spectacular start with a stunning hundred which marked the first ever for India Women in T20Is. 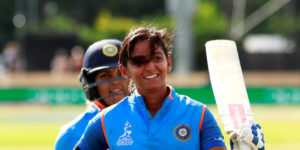 The right hander smashed seven fours and eight sixes, sending the New Zealand bowlers to the cleaners after she won the toss and elected to bat first. She became only the 3rd cricketer to cross the three figure landmark in the format.Following her century, India went on to register a mammoth total of 192-4 in their 20 overs which is currently the highest total in the World T20 competition. As expected, the twitter world did not hold back and poured in their wishes after witnessing a splendid knock. Here is how the twitter reacted to her breathtaking knock of 103 in just 51 balls.https://twitter.com/virendersehwag/status/1060938757963169793

A captain's knock from @ImHarmanpreet. First 💯 for India in T20Is & that too at the biggest stage. Well played! 👌 @BCCIWomen @WorldT20 #WT20 pic.twitter.com/XvB0uve32U

You little beauty @ImHarmanpreet .. Great knock to kick start campaign.. and excellent support from #Rodriguez.. All the best girls.

Leading from the Front in STYLE !! Captain @ImHarmanpreet scores a magnificent 100 in the inagural game of the #WWT20 for @BCCIWomen against New Zealand at Guyana. Start of lot more fireworks to come. Well Done 👏 pic.twitter.com/YJUW9MXGr0

Most sixes in an innings in Women’s T20Is:

Mind. Blown. Six months ago Harmanpreet was struggling for consistency. Now, in what could be a virtual quarter-final, she turns it on like this. What a player. #harmanpreetkaur #WT20#WatchThis #NZvIND

No Indian has ever played two innings of such insane quality in ICC tournaments.
Both against outstanding sides with excellent bowling and fielding outfits.
Harmanpreet Kaur is a genius.#INDWvNZW#WWT20

What an innings from Harmanpreet Kaur 🔥 https://t.co/aVvfDqB8DG #WT20 #INDvNZ pic.twitter.com/vAttdBJh3B

Maiden T20I 💯 for Harmanpreet Kaur – first by an Indian

100 FOR HARMANPREET KAUR, THE FIRST BY AN INDIAN IN T20IShttps://t.co/LwWwyW77vs pic.twitter.com/c5kAJd9ubB

No team hit 8 sixes in the entire Women’s @WorldT20 tournament in 2016. Harmanpreet Kaur alone hit 8 maximums today. Shows how much women’s cricket has evolved in couple of years. Amazing start to the event. #WT20 👏👏

"Harmanpreet Kaur" trending higher than "Theresa May's Brexit" and all is well with the world. #WT20 #bosh

What a way to star the World T20! Sydney Thunder's Harmanpreet Kaur 🇮🇳 smashed 103 off 51 balls for India. #WT20 pic.twitter.com/7VmilwyAGC

An excellent century to begin the @WorldT20, @ImHarmanpreet. Congratulations on your amazing knock. #WWT20 #INDvNZ pic.twitter.com/qj7XvWeP9N