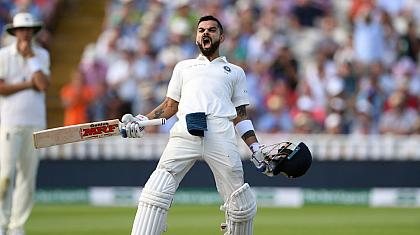 Indian Captain Virat Kohli scored a scintillating knock of 149 to bring team India right back into the contest. 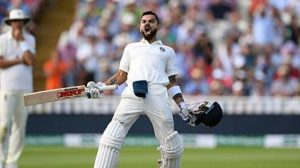 After dismissing England for 287, India set out to bat on day 2 hoping to take a lead. The openers got off to a good start putting up a 50 run partnership. This was soon followed by 3 quick wickets from the quickie Sam Curran.

Following this Carnage, Virat Kohli came out with his team in a spot of bother. Stitching up important partnerships with Hardik Pandya and later on with the tail enders, Virat got to his 22nd century in style.

He then went on to score 149 before getting out to Adil Rashid. His knock comprised of 22 fours and a six. Virat’s knock turned out to be a crucial one as India who were ion the verge of conceding a huge lead to their opponent’s just had to concede 13 in the end.

Personally for himself this turned out to be an important knock. The celebration following the hundred showed Virat how much this hundred meant to him. He had managed to score 15 runs more than the total runs he accumulated in the 2014 series vs England.

Here is how Twitter reacted to acknowledge this magnificent innings:

Virat Kohli gets out after a sensational knock of 149, #TeamIndia all out for 274. Trail England 287 by 13 runs.#ENGvIND pic.twitter.com/7rEKYkur9r

A brilliant hundred from Kohli. Scored more in this first innings than he did in 10 innings in 2014. Added 99 so far with Shami, Ishant and Yadav , who have scored 8 between them. #ENGIND pic.twitter.com/POeNkl9Oip

A masterclass from Virat Kohli, leading from the front. A display of tremendous character determination and grit #ENGIND

What an inning.! Absolute dedication, commitment and focus… Not every test innings keep you glued to the TV through the whole inning but this one did. It was an absolute masterclass from the GOAT. #engind

Just stood up in our studio and applauded. One of Kohli's best. Full of grit and patience. Proper test match batting. #Class.

So adorable that there were people that thought Kohli wouldn't absolutely boss it in England in this series. #GUN

India’s future is safe. Virat Kohli is already in the 22nd century.

A lot of heat on Kohli and produces a 100 in his first innings. #class 🏏

What a player what a knock #Kohli