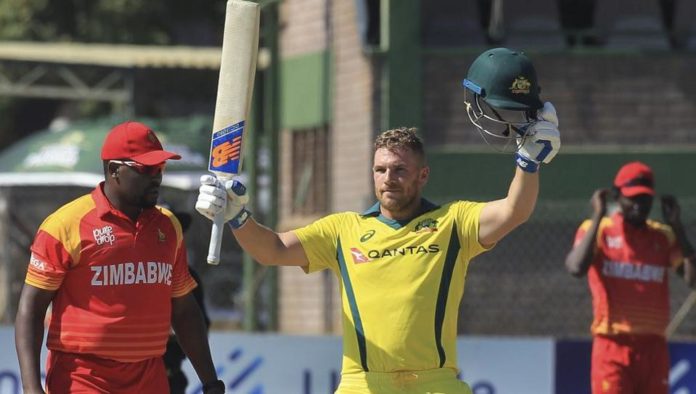 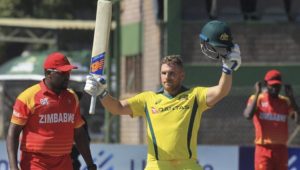 Australian captain Aaron Finch smashed a record breaking score of 172 as Australia went on to beat Zimbabwe by 100 runs in the T20 Tri-Series here at Harare.

Opening the batting with D’Arcy Short, the duo scored 223 runs for the first wicket which happened to be the record first wicket partnership in T20Is.

Out of the total score of 229 which the Aussies posted Finch scored 172 runs of it for which he used up only 76 balls. The knock comprised of 16 fours and 10 sixes.

On course of scoring this mammoth score, Finch broke his own personal best of 156 which he had scored against England in 2013. Also he missed the overall record of highest score in all T20s falling 3 runs short of Chris Gayle’s 175.

Here is how twitter reacted to his blockbuster innings:

Aaron Finch now has two T20I centuries. They are the two highest individual scores in T20Is.

Oh @AaronFinch5 172 off 76… one of the greatest knocks of all time! And selectors wanted you to bat down the order! Always a true opener..
simply 👏🏻👏🏻👏🏻👏🏻#AUSvsZIM

Wohhh I’m a bit behind, but I just checked the cricket score 😱😍👏🏼 @AaronFinch5 that’s crazy, seeing them like beach balls 🏐 #AUSvZIM #bosh #flattrack

WORLD RECORD! Aaron Finch breaks his own record as he moves to 160* off 71 balls – the highest score ever in T20 international cricket!

India vs England: 1st T20I Preview- Clash of the mega-weights at Old Trafford