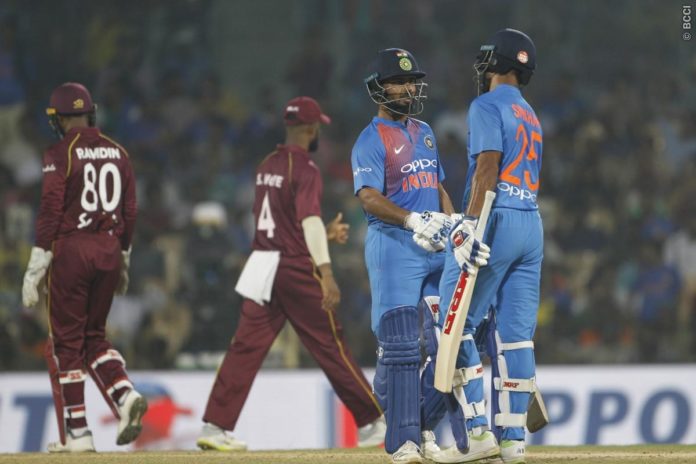 Team India, inspired by a 92 from Shikhar Dhawan coasted to victory in the 3rd and final T20 vs the Windies at Chennai, despite the scare in the final over. Dhawan along with Pant added 130 runs for the 3rd wicket to guide India home. 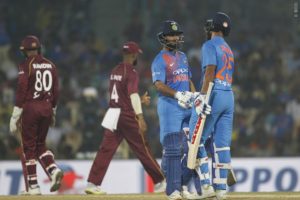 Windies who came into the match after losing the first two encounters, elected to bat first in a bid to avoid further humiliation. Their openers, Shai Hope and Shimron Hetmyer got their team off to a solid start scoring 51 runs in the powerplay.

Chahal, who came into the side in place of Kuldeep Yadav soon entered into the attack and removed both the openers. Darren Bravo then joined hands with Dinesh Ramdin to continue the innings. Ramdin, who had got of to a good start, soon fell after losing his stumps to the homeboy Washington Sundar.

At this stage, Windies were at 94-3 at the end of 13 overs. They needed some crucial contribution from the incoming batsmen if they were to post a good total on the board. Just as they wished, they got their much needed finisher.

Nicholas Pooran entered the crease and wasted no time in getting a move on. He scored a brilliant knock of 53* in just 25 balls that comprised of 4 fours and 4 sixes. His innings was brilliantly complemented on the other end by Darren Bravo, who ended with a score of 43*. The pair added 87 runs between themselves to help Windies post a total of 181 in their quota of 20 overs.

The experienced pair of Rohit Sharma and Shikhar Dhawan knew that they had their task cut out. India lost Rohit early, as he was caught by Brathwaite in the 3rd over. KL Rahul then came in and continued to keep the required run rate in check, getting off to a quick start. But he too fell soon for 17, failing to convert his good start.

At this stage things looked difficult for team India, as they needed another 137 runs in 88 balls. But the pair of Dhawan and Pant then joined hands to take the game away from the visitors.

The initial overs between the pair saw them not time the ball well. The required run rate also shot up to 10. But post the midway mark, the pair found their way and took control of the game. Poor bowling from the Windies saw the game slip away from their grasp.

Dhawan and Pant started to display their A-game, bringing up India’s hundred in just 11.5 overs. Dhawan, who soon reached his half century had his sights clearly set on the three figure mark. Meanwhile, Pant, showcased his class, playing his trademark shots behind the wicket and collecting some cheeky boundaries.

After Pant reached this 50, it was now just a matter of time before team India wrapped up the game. Needing another 8 runs from 12 balls, they were expected to cruise home. But Pant lost his middle stump in the very next over to open the game for a late twist. Incoming Pandey could manage only 2 runs in the remaining four balls of the over.

With India needing 5 of the last over, they lost Dhawan too, holding out to Pollard after he looked to seal the game with a big six. Pandey then along with Karthik guided the hosts home of the last ball, avoiding a late upset.

The win sees India wrap up the series 3-0. Shikhar Dhawan won the man of the match for his match winning knock of 92 while Kuldeep Yadav received the man of the series. The game thus concludes the home series vs Windies. India will now travel to Australia to take them on in a 3 match T20 series that commences from 21st November.